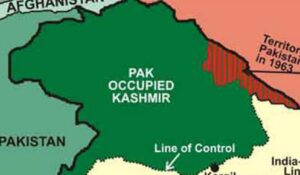 India celebrates Vijay Diwas on 16 Dec to commemorate 51 years of Victory in Bangladesh. Last month, Raksha Mantri Shri  Rajnath Singh was on a day’s visit to the India-China border in Eastern Ladakh. This was his second visit during a span of a few weeks. He made a specific mention of the part of the State of Jammu and Kashmir under Pakistan’s illegal occupation and said that India will take back POK in accordance with a resolution passed unanimously in Parliament in 1994.  Accusing Pakistan of torturing and harassing the people of POK, he defined  the political will of the New Bharat. Few days ago, in a TV panel discussion, the anchor asked me –“Sir! When are we taking back Pakistan Occupied Kashmir (POK)?” I smiled and said-“ It’s a feel good factor.” Is India preparing for Bangladesh War Season 2?  Let’s have a reality check.

India had 4 golden chances that Pakistan presented in the form of four  wars they lost, but we  did not do it back. India has always believed in peaceful co-existence and many a times made friendly moves for a good neighbourly relations with Pakistan but every time, we have been  betrayed with a hostile posture and increased terrorist activities from across the border.

India is progressing well as the fastest growing economy in the world and today we are a power to reckon. Any misadventure  will derail the economic progress and take the country back by more than a decade or so. War is a costly hobby and the price of war in terms of economy and human lives will have to be clearly weighed by the decision makers, before we undertake such bold action.

India has amply demonstrated our political will to take revenge of anti-India activities and Pakistan sponsored terrorism by surgical strikes in 2016 and then airstrikes at Balakot in 2019. History is also testimony to the fact that we liberated Bangladesh and broke Pakistan into two parts, in just 14 days. Pakistan army has not yet got over the shame of 93000 soldiers surrendering to Indian armed forces in 1971. They still carry that stigma and it found place in farewell speech of previous Pakistan Army Chief, Gen Qamar Javed  Bajwa. The Raksha Mantri’s statement on POK manifests the changed political will of New Bharat.

India Armed Forces are  among the world’s largest  defence forces   because India has  the largest unsettled borders of approx 4800 kms with two aggressive neighbours, who are also nuclear powers.   India is truly justified to have  high defence spending for operational readiness of such large force.  Militarily, India is  better equipped today for a future war, as compared to 1971. However, to take on an offensive of the magnitude of taking POK back will need a detailed thought. The following aspects merit   consideration-

India had gone to UN in 1948 with the Kashmir issue and thereafter in various forums, India has always reiterated that sanctity of ‘Line of Control (LC)’ should be maintained. Pakistan leaves no opportunity to keep the Kashmir issue alive in international forum. LC is now   accepted as ipso facto border between India and Pakistan.   Even during Kargil war, Defence forces including Indian Air Force was not permitted to violate the sanctity of LC by the Indian Govt, in order to project India as a mature democracy, to the international community.  Therefore, now to change stance and go into POK, will  be difficult to justify.

Taking POK by force from Pakistan will have to be legitimately justified to the world. Though the powerful  nations can do anything and justify it, like China took over Tibet and Russian annexed Crimea. Russia’s invasion of Ukraine is also based on religious and cultural ties and ethnic similarities. General public uprisings are also engineered to create a valid reason. However, the world does not agree to such arguments and annexation of territory by force is not approved in 21st Century.    India has also made it clear in the Ukraine conflict that it does not favour war as a means to resolve international disputes. PM Modi is on record to say-“This is not an Era of war.” 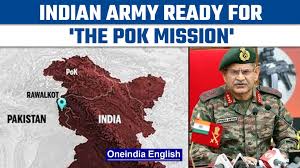 India’s stand of principled neutrality during Russia’s aggression in Ukraine has also not been taken kindly by the west and the USA. India has her reasons and we are working in our  national interests. But the so-called free world has framed a negative impression of India.

China being member of UNSC will take the lead to declare India as an aggressor. Large no of economic and diplomatic sanctions will be slapped on India. Presently, India is  a fragile economy with 65% exported war equipment and large  export of oil. After Ukraine war and prolonged sanctions, Russia will be too weak   to support India and veto such resolutions, against the wishes of China. Therefore,  India will be throttled to stop war, by the West and China. It will have to pay a heavy price for taking POK, with only a political advantage. It will add poverty, underdeveloped area and   more underprivileged population  to India’s problems.

Pakistan is in utter chaos today due to economic crisis and political turmoil. Nature has also not been kind and ravaging floods have also added to its woos. Hardliners and extremist organizations are calling the shots over weakened Govt and non assertive Pak Army.

Economic Crisis.  Pakistan’s current economic indices are quite poor. According to the UNDP, Pakistan is facing a debt in excess of USD 250 billion. Since the start of 2022, the Pakistan rupee has lost over 30 per cent of its value. GDP growth is  only 2 %  in the current fiscal year.    The current rate of inflation shooting to  23%.  The cost-of-living crisis is sinking millions of people into poverty and even starvation. The recent floods are expected to have a substantial negative impact on Pakistan’s economy.   Pakistan was in Grey list of the Financial Action Task Force (FATF),  for four years and did not get any monetary assistance from IMF and world bank. With the present state of economy, Pakistan is on ventilator and heading towards collapse  similar to Sri Lanka.

Pakistan society today is almost on the brink of a civil war. It has already sunk into chaos and disorder, and the writ of the civilian, as well as the military administration, is hardly visible. Never has Pakistan been in such a disarrayed situation as now, owing to her internal politics. Islamabad and Rawalpindi are in churn. The Shehbaz Sharif government, besieged by a crumbling economy and skyrocketing inflation, is visibly under pressure.  Religious hardliners and extremist forces are dominating the political arena. Further rise in tempers will lead to    more violence and civil unrest.

The region has also been linguistically and culturally marginalized by Pakistan rulers,   for nearly 75 years. People of POK are being deprived of all basic rights  by Pakistan and   it  remains an underdeveloped territory with lack of infrastructure,  due to Islamabad’s apathy. POK has suffered many budgetary cuts by successive Govts. China is  making inroads into this territory to fulfill its ambitions. POK is presently at the crossroads of  conflicting interests of India, China and Pakistan.

Stark contrast in the development of the two Kashmirs has created unrest in POK as India is implementing several new projects in Jammu and Kashmir to meet the demands of its citizens. Sentiments against Pakistan, are fierce and alarming. Political unrest is brewing in POK, primarily because of denial of basic rights.The establishment has brutally crushed political unrest in POK in the past. POK is likely to become the geo-strategic chessboard between India, China and Pakistan.

Crystal gazing into future indicates that there is considerable anti-China feeling spreading in Pakistan. In due course, if they fall apart like USA and Pakistan, the geo-strategy of South Asia would undergo a sea-change. India is making new friends in the Arab world and Pakistan has been snubbed many a times.   It  is possible  that Pakistan may be isolated from   its closest allies, USA, China and the Arab world.  In the time-frame that this change comes about,  India would be militarily powerful to take back POK by force, economically strong to withstand sanctions that will accrue and politically strong to justify the actions in the  international forum. Once that is done, taking  POK will be a cakewalk.

Taking POK is a wishful thinking and a dream come true for Indians. It’s good to keep the issue alive by sloganeering and rhetoric for the masses during elections. However, it also gives a clear message to Pakistan and China about the intent of  New India.  It’s a ‘feel good’  factor whose time has not yet come but we can keep the pot boiling.