The nationwide lock down was put in place overnight on 25 March! The government undoubtedly had good reason for doing so but it did leave lakhs of people stranded in various parts of the country. Among these were several Sikhs families from Punjab who had gone on pilgrimage to Gurdwaras across the country. Nearly 4000 Sikhs pilgrims including women and children were stranded at Gurdwara Hazur Sahib, Nanded. 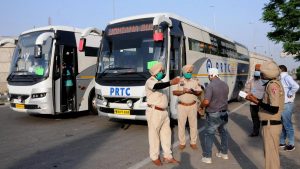 As soon as this news came out, all political leaders got into “letter writing” and “information passing” mode, basically to cover themselves up in case of a negative political fallout. Punjab Chief Minister Amarinder Singh urged the Central and Maharashtra governments to evacuate pilgrims immediately . He let known his efforts through a Tweet. “Have written to @AmitShah & Maharashtra CM @Office0fUT to facilitate the evacuation of devotees stranded at Nanded Sahib Gurdwara. The pilgrims have been stranded there for long & we owe them safe return to their homes & families,” said the chief minister in his tweet.

Harsimrat Kaur Badal, a Union Minister from the Akali Dal had also jumped into the bandwagon of gaining “pilgrim assistance brownie points.” She came out in media to give detailed explanations of the number of visits she had made to Home Ministry and Government offices to get sanction of move of pilgrims.  Some other leaders who have a stake in Punjab made similar claims.

The Union Government ultimately allowed the move on 22, April, when the second lockdown was in its culminating phase. Apparently, the sanction was given in accordance with its opening up policy and not due to any ministrations from politicians.

It then fell upon the state leaders to organise the return of pilgrims in a manner that adhered to all protocols required to be followed under prevailing medical conditions, including, social distancing during travel, use of masks, food and rest under well managed conditions etc. More important was the quarantine of the pilgrims once they reached Punjab followed by the mandatory medical tests. The administrative requirements were of a simple nature well within the capacity of the Government. The opposition Akali Dal and the Shromani Gurdwara Prabandhak Committee (SGPC) could have stepped up to assist the Government where required. Notably, all Gurdwaras under SGPC have huge Saraos (pilgrim rest houses) that could have been utilized for quarantine purposes. Langar facilities could have been used for our own people as they are being used for the rest of the world.

So happy were the political leaders with their “successful efforts in getting the pilgrims back” and the  anticipated accolades flowing from  the media that they completely forgot the massive administrative protocols that were needed for the move. Basking in the glory of having “taking the permission for movement of pilgrims from the Union Government” the Akali Dal sat back to watch the fun as the pilgrims moved back in Government buses. 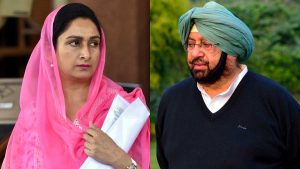 Since nobody came forward to organise the quarantine, the people went back to their homes and this caused a spread of the virus. The order of quarantining came five days later, by then, the damage has been done and  virus spread in Punjab has witnessed a perceptible increase. More than 200 pilgrims out of the 3,500 brought back have tested positive of the virus, the number is increasing by the day.

Now no political party is coming forward to take responsibility for the lapse. After a short period of stunned silence the process of blame game is in full swing. Punjab Health Minister Balbir Singh Sidhu blamed the Maharashtra government for not testing the pilgrims. He further said that the government did not help the pilgrims and they were left on their own. Punjab Chief Minister Amrinder Singh has also indicated that the infection was already present in Nanded.

Maharashtra Cabinet Minister Ashok Chavan has stated that the pilgrims contracted the infection from drivers who ferried them Punjab. He has gone a step further and blamed Punjab for the outbreak of Coronavirus in Nanded through the drivers of the buses.

The Nanded administration and Gurdwara Hazur Sahib authorities claim the pilgrims were regularly screened during their stay and did not exhibit any symptoms before they left. Incidentally, Gurdwara Hazur Sahib premises have been sealed after the test results came out positive.

Akali Dal is demanded resignation of health minister of Punjab for not putting up guidelines of testing all pilgrims on their arrival.  Akal Takht Jathedar, Harpreet Singh, has termed declaration of Takht Sri Hazur Sahib as home to the Coronavirus as a big conspiracy  to “malign” the Sikhs just as the Muslims were after the Tablighi Jamaat episode.

The self serving and obtuse manner in which the political leadership in Punjab is behaving in the wake of the fresh crisis that has befallen the state is in very bad taste. Firstly, the effort to get the pilgrims back does not constitute an award winning social service as the politician wished to make it out to be; it was merely  performance of their mandated duty as elected representatives of the people.

Even more grotesque is the manner in which all blame is now being put upon the hapless pilgrims. For no reason they are being stigmatised and converted into outcastes when their plight calls for utmost social sensitivity.

Sardar Iqbal Singh Lalpura , a social activist from Punjab has given out a very practical and humane appeal in this regard ” We should make effort to properly treat those who are  caught in the  corona infection; instead of scaring them we should work towards giving them a good life back, those under quarantine should get the best facilities and medical treatment. Our Prime Minister has guided us well so we need to support him well. Punjab Government has lapsed in the management of pilgrims who have been brought back from Gurdwara Hazur Sahib, Nanded; we must now leave the lapse behind us  and work together to meet the challenge.” This appeal should be adhered to by the leadership in letter and spirit.

The challenge is not over, soon there will be more arrivals as students and labourers from across India start getting back to their homes in Punjab. The political brinkmanship should stop forthwith. The need of the hour is for the political leaders and religious/social organisations to set their personal agendas aside and be a part of the national effort to fight Corona as all common people of the nation are doing.

(Jaibans Singh is a social activist, columnist and author)