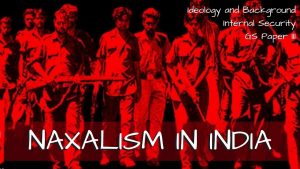 “Naxalism and communism go against the free spirit of India &Punjab ”

The term Naxal derives from the name of a village, Naxalbari in West Bengal, where a peasant revolt took place in 1967. The peasants of Naxalbari, who mainly worked on tea plantations and at large estates, had for centuries been exploited by the landowning classes and the moneylenders. On March 25, 1967, one of the sharecroppers in the village tried to till the land from which he had been illegally evicted, the landlord got him brutally beaten up and took away his belongings. Exasperated by the exploitation of the landlords, the peasants of the village got together and rose in rebellion.

The ideological base of the movement was laid by a person named Charu Mazumdar. Mazumdar was born into a family of small landowners but had risen in the ranks of the CPI and later the CPI-M. Frustrated by the failure of a communist takeover in India, Mazumdar turned to the example of the Chinese Communist Party (CCP). He put forth a view that revolution in India must come from the peasants in rural areas rather than the working class. While in prison in the mid-1960s, Charu Mazumdar wrote a set of nine essays that would serve the basis for Naxalite ideology. He then officially split from the CPI-M by forming the Communist Party of India- Marxist Leninist (CPI-ML) giving credence to the well known slogan “China’s Chairman is our Chairman. Chinese path is our path.”

From West Bengal the Naxal movement spread to less developed Tribal areas of Chhatisgarh, Odisha, Andhra Pradesh and Telangana. The concept of revolution being followed by them gave an extremist militant sheen to the movement which led to perpetration of violence. The call was for the Indian peasants and lower class Tribals to overthrow the government of the upper classes by force.

In the immediate aftermath of the Naxal uprising, the urban youth of India, several among them being from the privileged sections of society, were inspired by the concept of revolution. Flush with the exuberance of youth they looked upon the Naxal movement as their tool for bringing change similar to the manner in which their parents’ had risen against the colonial state. It was not uncommon to see Naxal posters on the walls of colleges in Calcutta and Delhi. Many students left college to join the Naxalites. 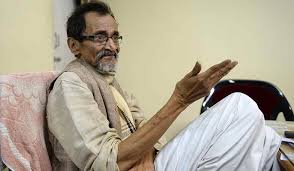 The Naxal leaders had not only rejected India’s freedom from the British occupation in 1947 as “sham”, but dubbed it as mere “transfer of power.” From their perspective, India was still a semi-colonial power. They tried to embrace all the marginalised sections of the society into their class struggle and showed their solidarity with the oppressed communities such as Dalits with the objective of prompting them to rise against the Indian Union.

Over the years, the Naxal game plan has changed significantly; Naxal cadres have thrown ideology to the winds and are now behaving like common criminals. They are no longer committed to a socialist, people friendly ideology but are driven by self serving motives. Naxals have escalated violence levels by indulging in heinous actions that expose them as remorseless, fundamentalist and pathological killers who enjoy inflicting misery for no logical purpose. Frequent killings of villagers, using women and children as human shields, harassment of cadre, illegal mining operations, attacks on schools and infrastructure projects are commonplace occurrences in their policies. Even the dacoits of days gone by were better since they operated with some principles; the Naxals are totally devoid of any strength of character.

The crux of the Naxal game plan is to spread unmitigated terror and a complete sense of insecurity among their target segments which are to poor locals and the local Police establishments. To achieve this objective they do not hesitate from wanton killing be it of security force personnel or the poor civilians.

Even today development work in districts having a Naxal presence is targeted for delay and disruption, though the impact is much less than before.  The reason behind this strategy is not difficult to comprehend. With lack of development the Naxals can subjugate the poor population and also instill in people an anti-national sentiment. Secondly, inaccessibility due to lack of development facilitates for them safe areas to train and hide. Further, the Naxals like to project inaccessible pockets of these tribal regions as “liberated zones.” 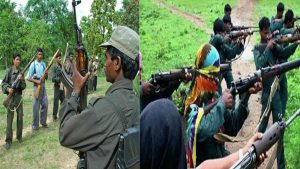 In Punjab the Naxal movement found support from the Dalits and other marginalised farmers, a majority of whom were Sikhs. They were not ready to shed their religion but did subscribe to a policy of revolting against the rich landlords of the state.  In the late 60s and early 70s, left wing elements created considerable hold in Punjab and especially so in the Malwa region. They too got extensive support from the academics and the intelligentsia of the state as was the case earlier in Delhi and other cosmopolitan centres.

However, before the movement could gain firm roots it was overtaken by the Jarnail Singh Bhindrawale wave that ushered a bigger menace of terrorism in the state. An attempt was made and continues to be made to align the ideology of Bhindrawale with that of Naxalism but such an effort does not lend itself to reasonable analysis.

The Naxal movement, however, has not completely died in Punjab.  Pro-naxal groups have been known to consistently attempt infiltration into farmer unions and educational establishments among other institutions. The attempt to increase sphere of influence is very strong. Credible intelligence inputs of Naxals having identified Punjab among 15 new states for making inroads are available.  Literature from Naxal groups already operating in other states has been confiscated in Punjab.

Punjab is looked upon as a soft target for the spread of Naxal ideology since it had the basic parameters of unemployment, anti-establishment feelings, mob mentality, restiveness, farmer problems, etc that have developed, over years, as prerequisites for a revolution. There was also a big and growing disparity between the haves and have-nots. Rapid urbanisation, agrarian crisis and breakdown of the redress mechanism in both the civil and police administration is leading to accumulated anger among groups living on the margins of society and providing fertile ground to radical elements including Naxals.

Naxalism and communism go against the very spirit of Punjab where free enterprise and religious affinity to the Guru Grant Sahib prevails across all segments of society. All attempts to impose it upon the people are bound to be defeated .

The Naxal hit areas are in urgent need for development; the government is willing to pump in the required funds for buildup of infrastructure but the Naxals are not allowing the flow to be maintained. The Naxal movement, however, is being challenged by the spirit of democracy and freedom that India thrives on. The biggest confrontation to this unmitigated violence is coming from the people themselves who have realised that Naxalism is, in actuality, a roadblock to their progress and prosperity. They are now getting determined to fight for their rights.

Once the voice of the nation is raised against the Naxals they will lose support and get isolated, the security forces, safe in the knowledge that they have national support will be able to function without restraint and with high morale. It is in this direction that the national anti-Naxal strategy needs to be focused.