You are here: Home / Areas of Study / National Perspectives / Operation Meghdoot: Victory in the face of monumental odds
Share 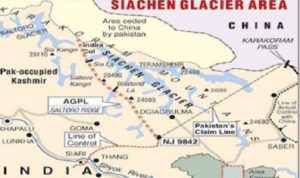 Siachen , known as the highest battle field of the world, is located in the eastern Karakoram range in the Himalayas. In Balti dialect the word means “Garden of Roses.” It forms the western edge of the Union Territory of Ladakh and is the second longest Glacier in any non-polar region. The 2500 sq kms Glacier originates from Indira Col in the North at the altitude of 21000 feet and rolls down 74 kms to Partapur  Base camp to 12000 feet. It is a slow moving mass of snow which witnesses frequent avalanches and has deep crevasses. The average snowfall is more than 25 feet and the temperature in winters goes as low as minus (-) 50 degree Celsius.

After the Indo-Pakistan War of 1965, Tashkent agreement was signed between Lal Bahadur Shastri , then Indian prime minister and President Field Marshal Ayub Khan of Pakistan. The Cease Fire Line (CFL) was converted to Line of Control (LOC). India claimed that the LOC went Northwards from NJ-9842 and Pakistan imagined that it headed Northeast towards Karakoram Pass. The Virgin Siachen river of frozen snow remained unoccupied till 1984.

Pakistan permitted a few international expeditions along with a Liaison officer from the western side since 1974. A map obtained by RAW from a member of a German Expedition who got it from the Pakistan Army showed Siachen as Pakistani territory with the LOC linking from NJ-9842 to the Karakoram Pass . In May 1984, Pakistan again permitted a Japanese Expedition for Rimo 1 peak located well beyond Saltoro Ridge.

The Indian Army also launched a few expeditions to reconnaissance and dominate the Siachen area. The most important expedition was led by Col Narinder Kumar (nicknamed  Bull) to Teram Kangri Peak in 1978. The Expedition upgraded the map of area and took wonderful all round Photographs/ Videos of the panorama beyond Salroro Ridge. The first landing by a Chetak Helicopter at Siachen in support of the expedition was conducted on 6 October 1978. 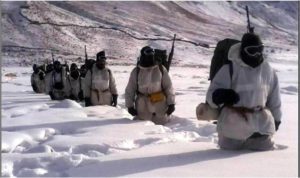 The Indian intelligence agencies reported a large scale procurement of arctic clothing, snow tents and mountaineering equipment at London (United Kingdom) by Pakistan in March 1984.It became known that the enemy was planning to launch Operation Ababeel on the Saltoro Heights on 17 April 1984. A plan to counter Pakistan was discussed in the Cabinet Committee of Security. General Arun Vaidya , then COAS,  was given clearance to launch a pre-emptive counter operation.

Operation Meghdoot was launched on 13 April 1984 by the Indian Army to seize control over of the Glacier. Lt General P N Hoon, the Northern Army Commander, personally briefed the Task Force commander Brig Vijay Channa. The fully acclimatized troops of Kumaon Regiment and Ladakh Scouts were assembled in Siachen Base Camp. A massive logistics build up was carried out at Leh with the help of IL 76 and AN 32s.

Finally, the troops moved up,  and after four days march, occupied critical passes  Sia La,  Bila Fond La and later Gyong La along with the commanding heights of the Saltoro Ridge. A chain of well protected  posts, all along the ridgeline were established on the reverse slope  with Observation Posts on the crest line. The Pakistan troops who arrived on 17 April 1984, were surprised and beaten back with heavy casualties. The Indian Tricolour was proudly hoisted at the highest battle field in the world, it could be seen 20 kms away by the adversary.

In a daring in a Heli-borne mission in early 1987, a team of Shaheen company of 3 Commando SSG  of Pakistan, occupied a dominating post on Saltoro Ridge, south west of Bila Fond la. The operation was launched and directed by then Brigadier Pervez Musharraf. The post was named Quaid-e-Azam Post. It overlooked the Indian positions, especially air maintained Sonam and Amar Posts. The Pakistani troops used to fire at Helicopters approaching the posts for logistics missions. On 18 April 1987, heavy firing from Quaid Post resulted in fatal casualties of six Indian troops  at Sonam post.

8 JAK LI was deployed in the second week of April 1987 under its daring Commanding Officer (CO), Lt Colonel A P Rai. He vowed to neutralise  Quaid Post during his tenure. On 29 May, a commando patrol led by Second Lieutenant Rajiv Pandey was tasked to attack the post. As the patrol approached the post a snow blizzard reduced visibility. Under the cover of the storm, the patrol approached with an almost vertical climb of 80 degree gradient on a slippery surface and reached the bottom of the post. An ice wall of almost 500 metres was to be negotiated to reach the top. The patrol made a base duly concealed and moved under Night/fog cover. The CO was aware of the difficult situation, he suggested to the Patrol leader to mark the route and come back. The officer was so motivated that he told him, “Sir let me make an attempt.” 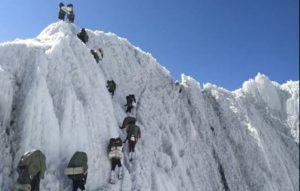 The team under sub zero temperature, in a blizzard condition and with no water, managed to fix Karabiners and climbing ropes and was a few hundred yards from the post when the weather suddenly opened up and visibility increased. The sentries on duty on the post were foxed for a moment but opened up with LMG and other weapons.  Second Lieutenant Rajiv Pandey , one JCO and 11 soldiers of the Patrol were  killed. Only two, who were still climbing survived.  The two survivors escaped and reached the Battalion Headquarters to relate the bravery of Patrol leader and other fallen comrades. The Unit was now more determined to take revenge and to occupy the Quaid post. The plan for Operation Rajiv, as coined by the CO and  presented to Brig Chandan Singh Nugyal, who approved the mission.

Operation Rajiv commenced on 23 June 1987.  Major Varinder Singh was the mission commander with one more officer, 3 JCOs and 57 troops. His column was detected by the enemy and came under accurate and effective Artillery fire. Two soldiers were fatally wounded and Maj Varinder Singh also was critically injured. The operation was temporarily suspended. The second attempt was made by a team led by Subedar Harnam Singh, which approached the post frontally, but came under heavy fire and had to withdraw  The third attempt made on 24 June by a patrol led by Subedar  Sansar Singh was more successful. The column reached under the post undetected and found the ropes fixed by Rajiv’s force. The patrol climbed almost 350 metres but it  could not establish  radio communication due to a blinding blizzard and the mission was aborted.

Lt. Colonel Rai finally tasked Naib Subedar Bana Singh, who was a seasoned mountaineer, told him select his team and  proceed to accomplish the mission. Naib Subedar Bana Singh selected Laxmi Das, Kashmir Chand , Om Raj and Chunni Lal in his team. All were expert mountaineers. He commenced his approach march under cover of darkness on early morning of 26 June and hid in a defiladed shallow crevasse. A snow storm was building up and soon visibility was zero; Bana Singh offered his prayers and told his team that God had given the required opportunity. Fortunately, the earlier rope could be located and the arduous near vertical climb of 1500 feet commenced at 1130h. A sharp wind was slashing the skin of the soldiers although they were covered by woollen masks and snow gloves. The team ascended step by step, the lead man slipped a number of times but managed to hold on.  Pakistan Artillery batteries were carrying out speculative fire to foil any surprise attempt.

After five hours of tough and hazardous climb, a faint horizon could be seen.AII muscles of the climbers were strained and aching, yet, the team moved on with steely determination, motivated by its gallant leader. The gradient now became gradual. The temperature was -30 degree Celsius. By last light the team closed behind a rock. Bana Singh first hit an unoccupied sentry post from where the big bunker was located about 20 yards away. The  enemy had become complacent due to the Blizzard, he could not imagine that after three failed attempts the Indians would strike again.  Bana Singh made a fire base and, with his assault group, advanced like a snow Leopard,  he lobbed two grenades at the entrance of bunker. Three Pakistani soldiers died due to the blast. Four Soldiers who came out were shot/bayoneted in close quarter combat and thus Quaid Post was captured. Bana Singh sent the success signal to the anxious CO at 2100h on 26 June 1987. The team firmed in even as Sepoy Om Raj was mortally wounded  by a splinter. The entire Saltoro Ridge was firmly with the Indian troops.

Nb Subedar Bana Singh , was born on 6 Jan 1949  in Jammu  in a farmer family . He was enrolled in Jammu Kashmir Light Infantry on 6 January 1969. He had done the mountain and winter warfare course and was an excellent mountaineer. Naib Subedar Bana Singh was decorated with Param Vir Chakra on Republic Day 1988, Subedar Sansar Singh and Subedar Harnam Singh were awarded Maha Vir Chakra. Maj Varinder Singh, 2Lt Rajiv Pandey (Posthumous) and five more soldiers were decorated with  Vir Chakra. Brig CS Naugyal and Lt Col A P Rai were awarded Uttam Yudh Seva Medal. Operation Meghdoot has the distinction of longest war between two countries fought on the highest altitude.