You are here: Home / Areas of Study / Governance & Politics / Punjab: A wave is fast converging in favour of the BJP+ alliance
Share

The Election Commission of India, in a noteworthy press conference on 8 January announced the election schedule for five states – Uttar Pradesh, Goa, Manipur, Punjab, and Uttarakhand, starting on February 10, with results to be declared on March 10. Strict COVID norms were applied by the Elections Commission. Restriction was imposed on political rallies, road shows, processions etc till January, 15 when a review of the situation will be carried out and further instructions given.

Elections for the 117 constituencies of Punjab will be held over a single day on 14 February with declaration of results on 10 March. The road to elections in Punjab was cleared by the decision of the BJP led Union Government to repeal the Farm Laws that had caused a widespread agitation in the state. The legislation’s were widely perceived to be in the interest of formers, their repeal is widely attributed to a dynamic and statesmanlike resolution by Prime Minister Narendra Modi to set them aside since they were not being accepted by a certain segment of the farmers community, especially those from the grain belt of the North

Punjab is now looking at a five cornered contest. In the fray will be two alliances (BJP+ and SAD+) and three independent entities viz the Congress, AAP and the nascent Sanyukt Samaj Morcha – if it can get its act together in the short span of time available.

Earlier, as a junior partner of the BJP-SAD alliance, the BJP used to contest only from 23 seats. Ever since the break-up of the alliance in September 2020, the party has been working behind the scenes, very hard yet very quietly, to build up its base for a pan-Punjab presence to contest in all 117 seats. The initial setback of some cadre jumping ship due to the farm agitation has been adequately set aside by a massive joining drive that has seen many Sikhs with a prominent political presence coming in the party fold.

While the party has the capacity to contest all 117 seats, a strategic decision to go into an alliance with two parties, the Captain Amarinder Singh led  Punjab Lok Congress and the SAD (Sanyukt), has been taken. The three parties have a like-minded objective of ushering an era of fast track development in the region that has wilted over time due to chronic corruption and misgovernance.

The people of Punjab are fast gaining an awareness that the BJP+ alliance is the only political entity that has the requisite strength, resources, experience and wherewithal to, not only provide stable governance, but also to assist the state in getting out of the debt ridden mess that it is in presently. The alliance can also give a huge boost to the economy with rapid economic reforms that would usher enhanced employment, better infrastructure, affordable health, education etc. 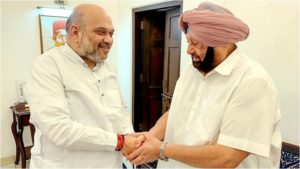 The alliance has the capability to significantly boost policing and vigilance through central assistance to counter corruption and control the drug and mining cartels that are playing havoc in the Punjab. It has the capability of securing the borders to ensure that there is no interference from the inimical neighbourhood. With its government in place the alliance will be in a position to come down heavily on such organisations that are attempting to engineer a divide between the various communities that inhabit Punjab, especially the Sikhs and the Hindus who have coexisted happily and in absolute synergy for many centuries.

Recently, Prime Minister Narendra Modi was scheduled to visit Ferozepur, Punjab to inaugurate projects that would have given a INR 43000 crore boost to the infrastructure of the state in a time bound manner. Also scheduled simultaneously was a visit to the Hussainiwala memorial to pay respects to the martyrs and freedom fighters of Punjab and address a rally of the BJP+ alliance.

The prime minister could not reach Ferozepur due to a security breach that has shaken the entire nation and is now being investigated under the scrutiny of the Supreme Court.  The matter, being sub-judice, cannot be commented upon but what can be said is that opposition parties used the incident to create a wave of apprehension across Punjab. It was alleged that Punjab will be put under President’s rule and the elections would be postponed. The ruling Congress even attempted to give the incident a Punjab versus rest of India spin.

It goes to the credit of the Union Government that it dealt with the huge crisis with utmost maturity. While the incident was kept within the confines of a security crisis that needed to be thoroughly investigated, no political vendetta was resorted to. No move was made to put the state under President rule, instead, the election commission announced the elections within three days of the incident occurring. This was an exhibition of democracy at its best considering that there are earlier instances where other parties, while in power, declared Presidents rule in states for far smaller reasons. 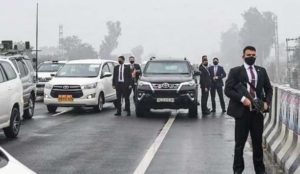 Breach in the security of Prime Minister Narendra Modi

Prime Minister Narendra Modi on getting back to Bhatinda after the security lapse said to the Congress representative at the airport, “Apne CM Ko Thanks Bolna, Mein Zinda Laut Paya” (Thank your CM, I could return alive). The remark is being twisted by the Congress and projected as an attack on “Punjab, Punjabiat and Sikhs.” This is a serious allegation and totally unsubstantiated since the remark by the prime minister was directed only against the chief minister whose administration failed to provide security to the prime minister of the country. There was no mention of Punjab or any other entity, the Congress would be well advised to desist from such false propaganda that can cause devastating divide in society.

Not only that, Prime Minister Narendra Modi, on the occasion of the birth anniversary of Guru Gobind Singh  on 9 January, 2022, personally declared 26 December as “Veer Bal Dives” to honour the sacrifice of the Sahibzadas (sons of Guru Gobind Singh). He, so clearly, exhibited his love and respect for Punjab and all Punjabis, especially Sikhs. He put a firm cap on all abrasive rhetoric that was being generated because of the security breach, mostly on social media through the forces that wish to generate unrest in Punjab.

The will of the BJP+ alliance to work selflessly for Punjab was exhibited during the course of this very serious incident of breach of the prime minister’s security. The alliance has firmly exhibited its confidence of winning over Punjab on the strength of the ballot.

The people have noticed that while the other parties make promises of small doles like free/subsidised electricity, free bus passes, free water, money to women etc the BJP+ alliance speaks of good governance, rapid double-engine growth, fool proof law and order, enhanced employment opportunities, good health and education facilities etc. The doles being offered by other parties are, in fact, going against them since Punjabis are too proud to extend their hands out to for help, they are looking for an honourable life where they get due remuneration for their hard work. They realise that only the BJP can provide such a life.

The people of Punjab are, by now, well aware of the good intentions of the BJP+ alliance and the goodwill that Prime Minister Narendra Modi holds towards them. They are also well aware of the fact that the other parties simply do not have the means to do any good for Punjab; they will only suck the state and its people dry to fill their own coffers.

The wave, therefore, is fast converging in favour of the BJP+ alliance, it being the only entity on ground that can provide credible good governance of the type that can propel Punjab to its lost glory of being the number one state in the country.