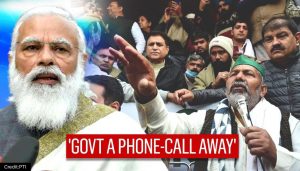 Republic Day, 2021, will be remembered in times to come as a day when the very idea of India was subjected to acute embarrassment due to the shameful behaviour of a few people misled on to the path of violence by forces that are determined to weaken the fabric of the Nation.

A little after the Nation witnessed an impeccable Republic Day parade  that made all Indian hearts swell with pride, traumatic visuals of a virtual siege of the capital city of Delhi by thousands of miscreants, attempting to pass off as farmers, were seen on television screens across India and the world.

The madness lasted till late evening and left nearly 400 police personnel injured  as they courageously performed their duty against insurmountable odds.  Public property was destroyed and one civilian lost his life. More than anything else, the incident broke the heart of every Indian.

The  saddest part of the violence was the defilement of the Red Fort, a sanctum sanctorum of Indian democracy from where the Prime Minister of the Nation addresses the people on every Independence Day in accordance with a tradition that commenced on 15 August 1947, the Independence Day itself. No words can condone the reprehensible act.

As is the normal practice in Indian democracy in recent times, the opposition put all blame upon the Government. The entire political leadership of the Nation is expected to stand as one to challenge an attack on national  honour. Sadly, it has once again let down the people with its blinkered and partisan response.

Three legislations pertaining to the agriculture sector were recently passed by the Government through prescribed parliamentary and constitutional procedures. These are collectively termed as the Farm Laws. They have been accepted by a major part  of the Nation even as some regions, mainly the northern belt of Punjab and Haryana, first expressed reservations and then launched a full-fledged agitation on the very borders of Delhi spearheaded by more than 30 Kisan (Farmer) Unions.

Despite being very certain that the bills  were in the interest of the framers with no provision needing amendment the Government, in keeping with the highest democratic traditions of inclusiveness, adopted a conciliatory and accommodating posture and offered to discuss the laws point by point and make amendments in areas that were causing apprehensions. It even offered to hold the laws in abeyance to facilitate a mutually acceptable solution.

The Kisan Union leaders, however, adopted a rigid posture by insisting that the bills be repealed, something that is neither feasible nor advisable in the overall benefit of the nation especially so when a vast majority of farmers across the country are in favour of the same.

Democracy is essentially the art of give and take. It thrives on discussions that lead to a mutually acceptable middle path. This is all the more relevant in India where diversity and geographic size do not facilitate a cut and dried solution acceptable to all. The Kisan leaders would have been well advised to accept the conciliatory efforts of the Government. It seems that they mistook the graciousness of the Government as a weakness and adopted a rigid posture despite being offered one facility after the other. This was a cardinal error on their part; the Government while being conciliatory is equally determined to uphold the sanctity of the Constitution and the good of the people. 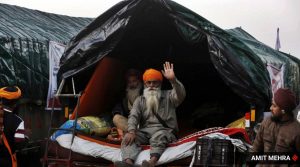 It is to the credit of the Kisan Union leaders that they managed to keep the agitation peaceful till the fateful violence on the Republic Day. They looked upon Republic Day as a platform to show their might and demanded to hold a rally of Tractors in the national capital. The demand was preposterous at the outset and should not have been agreed to by the Government. The Government, however, being privy to the peaceful nature of the protests conceded with the hope that it would assuage bruised egos and lead to a forward movement in talks.

An assurance in writing was given to the Delhi Police by the Kisan Union leaders that the Tractor rally would begin only on culmination of the Republic Day parade and would be held on prescribed routes. Sadly, the rally participants  broke all promises and entered central areas of the  capital city in large numbers along with their tractors, brandishing swords and other weapons. They sullied the iconic Red Fort, apart from creating obnoxious mayhem and thus causing great pain to the entire nation.

The Kisan Union leaders are now saying that those who went into central Delhi were not a part of their agitation. Earlier, when cautionary voices about some Khalistani and anti-national elements having infiltrated the protest were raised, these very leaders and their publicity machinery raised a hue and cry about the government and the BJP attempting to paint innocent farmers of Punjab as separatists. Now they are saying the same thing. They should have paid heed to the caution and remove undesirable elements from their midst before planning something as big as the Tractor Rally? In any case, on the evening of 25 January, it was clear to the Kisan leaders on the protest site that some elements among them were intent upon going to central Delhi. Why did they not stop the protest there and then and caution the police about the evolving situation? They played with fire and now have to face the consequences.

A major cause for tension being raised to such a high level is the predominant presence of youth in the protest site. They are mainly students unoccupied because of COVID induced closure of education institutions; some belong to families of farmers but are not into active farming. Most were there only for the excitement. They were consistently programmed through hate filled songs, social media posts and inflammatory speeches by out of work Punjabi actors etc. towards a violent response to the situation in the name of Punjabi resurrection. Surprisingly, the Kisan leaders and even elders within the Punjabi society did not consider it necessary to stop this repulsive indoctrination. The result is there for all to see; the lesson to be learnt here is that the younger generation needs to be directed towards positive contribution to society. Such negativity can lead only to ruin.

The future action needs to be worked out in a manner that provides a healing touch. Having been failed by their leaders, the protestors should go back home and ensure that no precipitate action takes place once again. The Kisan leaders should first get their house in order by removing all abrasive elements from within. They should work out an agenda that reflects the genuine aspiration of the farmers whom they represent . The agenda should be acceptable to all Unions. They should finally make a core committee of senior leaders and empower them to continue talks with the Government. The government has already declared that it is open to resumption of talks that would benefit all. When both sides want only the good of the farmers then why the distrust? It is hoped that the culmination of this sad chapter will be positive in nature.

(Jaibans Singh is a social worker, columnist and commentator)