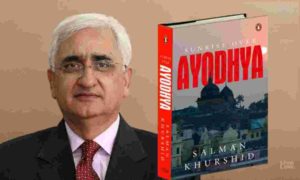 Whether by design or just a coincidence, Salman Khurshid released his book “Sunrise Over Ayodhya: Nationhood in Our Times” at a time when Uttar Pradesh Assembly elections are around the corner. Khurshid had lost his election for Member of Parliament in 2014 in Uttar Pradesh. His book has put him in the hot soup and who knows if his book launch will help or hurt his political party which is already on the last legs of untimely demise. There has been a flurry of media attention about the highly controversial book which I call a “Jihad bomb” and by most accounts will help Yogi’s come back next year.

What surprised but fascinated me at the same time was that Khurshid was accompanied by two of his former colleagues- Digvijay Singh and P. Chidambaram-for the book launch. I have been debating what does this trinity represent besides being career politicians of the Congress party which is at the brink of extinction by the current ruling BJP. This trinity could represent many things but I chose three different traits of Jihad, hate, and revenge’ by Khurshid, Singh, and Chidambaram, respectively. We first talk about the book author and offer an analysis of his choice of the book title and the most controversial statements in it.

Knowing Khurshid’s background, I thought of him more like an academic with robust intellect. Although I did not particularly care for his one-track Islamic ideology, I considered that his writings were persuasive and well-articulated in asserting, advocating, promoting, and politically pushing the Muslim agenda in India. As a career politician and a Muslim, he perhaps abused his power not only in promoting the Muslim cause but using his tone to reflect anti- Hinduism sentiments in a nation of majority Hindus. Who could have such a corrupted intellect other than someone believing in Hindu Jihadism? Only a corrupt mind of a radicalized Muslim may dare equate Hindutva with ISIS or Boko Haram.

For heaven’s sake, Khurshid was born in Independent India. He was raised, educated, and provided food and shelter in India which ultimately enabled him for Oxford education. His political career advanced in India which earned him the respect and distinction of serving as India’s “Super Diplomat,” the Minister of External Affairs. However, it is a tragic state of affairs that a disloyal Indian was representing India in external affairs. India trusted him but Khurshid betrayed that trust and we may never know the extent of diplomatic damage during his tenure.

At one level, his book title, “Sunrise over Ayodhya” signifies the rise of the magnificent Ram Mandir on the original site in Ayodhya. The lighting of over a million Diyas around Deepavali is not only welcome Ram in his Mandir after a long legal battle but it symbolizes the sunrise at the dawn of Ram-Rajya with eternal sunshine. As an author, Khurshid has the right to explore in detail and critically analyze the Babri Masjid-Ram Janambhoomi issue. As a lawyer, he has the know-how to discuss the legal battle and to some extent review the judgments of the Allahabad High Court and Supreme Court. However, he should know better than anyone that the judgment of India’s apex court cannot be undone no matter what Khurshid says, writes, and/or does.  Consequently, there will be no sunset about Ram Mandir in Ayodhya. 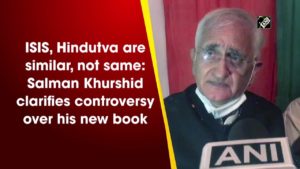 Even the conception of Hindutva being similar to the jihadist Islamic ideologies like ISIS and Boko Haram, Khurshid has done the biggest disservice of his political career. He has proved his disloyalty to India and damaged his self-respect and Oxford level intellect. I am happily surprised and admire the courage, wisdom, and public statement of his colleague Ghulam Nabi Azad. He said that despite our disagreement with Hindutva as a political ideology, distinct from Hinduism, any comparison of Hindutva with ISIS and Jihadist Islam is “Factually wrong and an exaggeration.” It is a slap on Khurshid’s face by another Muslim and a career politician with wisdom.

What was going through the minds of the other two who stood by Khurshid and made many unsubstantiated statements? Let us talk about Digvijay Singh who symbolizes ‘hate’ among the trinity. It was not too long ago when he had said “We are fighting against those who sow the seeds of hate against other religions in the hearts and minds of students at the Saraswati Shishu Mandir right from childhood. These seeds of hate gradually disturb India’s communal harmony, create communal bitterness and leads to riots.” Fast forwarding to his comments during the book launch, he said that Advani’s Rath Yatra, “was not to unite society, but to divide it and wherever he went, he sowed the seeds of hatred and created that atmosphere of sectarianism in the country.” The common phrase is ‘seeds of hatred’ which signifies Singh’s perverted thinking because of political defeat and frustration.

What is even more troubling is that Singh’s knowledge of India’s history is factually wrong. He said, “in the country’s history, vandalism and destruction of temples happened even before the advent of Islam, but an atmosphere has been created where it has been told that such acts came with Muslim rulers.” Is he suggesting that only 7 years of BJP rule has undone the history his Congress party had documented in their 68 years? This makes me wonder if Singh is a born Hindu without the historical facts or a brainwashed Hindu under the influence of Islamist/Jihadist like Khurshid.

A third of the trinity, the former Finance Minister and Harvard educated, personifies “revenge” because his henchmen in Congress party had called Chidambaram’s arrest in 2019  revenge by the current ruling party BJP. The arrest was made in connection with the INX Media scam case for which the high court had denied the anticipatory bail plea to Chidambaram. The court suggested that “he seems to be the “kingpin” and “key conspirator” in the case and needs to be interrogated in custody for the investigation to be effective.”

It is then not too unnatural that Chidambaram is carrying his revengeful attitude and obliged his cabinet colleague in the book launch. What was not expected of a Harvard educated Chidambaram is that he termed the demolition of the Babri Masjid in 1992 as a “terrible wrong” that debased our constitution? He went on to question the decision of the apex court of India. He said, “The jurisprudential faces of this judgment is extremely narrow, it is a very thin ledge, but due to the passage of time what the author points out is all sides have accepted it.” What better to expect of him who justified his enormous income as a farmer growing cabbage on his balcony.

Khurshid conceived and completed the book. Perhaps, he was not even thinking about what damage he was doing to himself? Why would he bring back the issue of Ayodhya which was settled two years ago and in that comparing Hindutva ideology with ISIS? I know that the unholy Bollywood has characters who think that way but it was unimaginable until this book that an Oxford-educated and celebrated author, Salman Khurshid, would have similar jihadist thinking. Although the other two of the trinity stood next to him and will pay the political price should they decide to come back but the biggest loser is Khurshid himself. The eternal sunshine in Ayodhya is to stay and may the trinity hold their breath forever that Ram Mandir leading to Ram Rajya in Uttar Pradesh is coming back in 2022.

(Vijendra Agarwal, is a US based Co-founder of an NGO, Vidya Gyan)

This Article has been published on behalf of Project GNARUS, a syndicated service and writers collective that helps writers publish articles, provide editorial services and build thematic analyses on select topics every month.