You are here: Home / Areas of Study / International Perspectives / Taiwan Imbroglio: Chinese loss of face and its consequences
Share 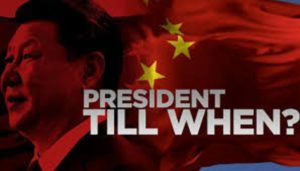 It is said that due to China’s massive economic and military power, President Xi Jinping is in a position to have the last word while carving out the relationship of his country with the rest of the world and more particularly with India? A recently published book , ‘The Last War: How AI Will Shape India’s Final Showdown with China’ authored by Pravin Sawhney has alluded that China can militarily overcome India in ten days due to the strength of its artificial intelligence capability.

The recent visit to Taiwan by Nancy Pelosi, the Speaker of the United States Representatives has negated the aforementioned arguments. It has exhibited the vulnerability of the Chinese regime that could do nothing more than describing the visit as reckless, irresponsible and extremely irrational. The Chinese had said that by visiting Taiwan Pelosi would be playing with fire. Well, she has escaped the flames with considerable ease  and shown the Chinese their place.

Pelosi, on her part, was wholesome in her praise of the democratic credentials of Taiwan; she praised what she called “Taiwan’s bubbling democracy” and swore eternal friendship of the US with the island nation.

After having engineered a successful political coup, the US diplomatic machinery is now attempting to ease the tension by playing down the visit. The White House has termed the visit as a “private affair.” However, nobody, and least of all the Chinese leadership, is convinced by the US diplomatic rhetoric.

China is now attempting to browbeat Taiwan into submission; reports suggest a drastic decrease in Chinese trade with the country. Less fruits and fish are going from Taiwan to China;  cyber-attacks on Taiwan’s foreign ministry, banks and commercial establishments are on the rise. By doing so, China is only exhibiting its crude hegemonic mindset which isolates the country from the rest of the world. Taiwan will, of course, live through the challenge of these sanctions and attacks and will, in fact, show the world the method by which Chinese authoritarianism can be countered.

The current Chinese leadership, especially President Xi Jinping, are finding themselves in a rather difficult situation. Jinping has always maintained an aggressive posture with regards to Taiwan and has often gone to the extent of giving open threats of use of force against any interference in the so-called dispute. Now that Pelosi has come and gone, his macho image has taken a severe beating. Suddenly there is a perception that Chinese pretensions of being a global super-power are quite hollow. All this is happening  at a time when Xi Jinping is looking for yet another extension of his tenure in November this year.

The chances of his getting the much coveted extension are quite weak since the country is fed up with his restrictive policies and especially so the mismanagement of the COVID situation. The economic downturn and unrest in Xinjiang and Tibet have a lot to do with the declining popularity of the leader. The Taiwan episode has put him into a very difficult situation indeed.

A visibly flustered China has attempted to put pressure on India. In a recent interview the Chinese ambassador to India has called for Indian support to the “One China” policy and obliquely hinted that future relations will be based on a positive response to this request. “It is extraordinary that he should say this after China has violated all previous border agreements, attempted unilaterally to alter the Line of Actual Control (LAC), massed thousands of troops on our border, continues to build military infrastructure to threaten our security and continues to claim large parts of our territory,” says Kanwal Sibal, a former Indian diplomat.

India has chosen to remain silent which acts as a literal slap in the face of the crude diplomatic pressure that the Chinese ambassador was attempting to exert. The necessary message to China has gone loud and clear.

So, we have a situation where neither the US nor China would be very eager to pursue the matter to a point where open conflict becomes inevitable. Nobody wants a Ukraine-like situation to emerge in yet another sensitive part of the world. There is, as such, every likelihood of the matter being pushed under the carpet sooner than expected.

Under these circumstances one can safely surmise that the doomsday scenario painted by Pravin Sawhney in his book (as mentioned above) and its endorsement by Rahul Gandhi is quite unsubstantiated. There is a reason here to explore the possibility of the idea being sponsored by some inimical forces.

Gandhi has been targeting the incumbent government consistently on what he terms as a “timid and docile” response to so-called Chinese transgressions across the LAC. It would be best for him to read history and understand the role of his party in the creation of the current situation. If he does so, he would be more amenable to his party discussing security issues with the government behind closed doors as a responsible opposition should, instead of attempting to take political mileage of the same.

However, there is no scope of complacency and India needs to remain vigilant and ready for all possible threats from China. An unstable political situation in any neighbouring country has the potential of a spill over in many forms, military intervention being the easiest to divert attention.

India will need to pursue mature but unyielding diplomacy backed by military power to ensure that China does not renege on any agreements.

China and the world should have no doubts about a strong response from India to any effort made by the neighbouring nation to alter the Line of Actual Control. India can be sensitive to Chinese concern only if China too exhibits sensitivity with regard to the Indian position regarding Jammu and Kashmir. There has to be adherence in letter and spirit to the three dimensions  of mutual respect, mutual sensitivity and mutual interests while carrying out bilateral dialogue.

(Jaibans Singh is a strategic analyst, columnist and author)