You are here: Home / Areas of Study / International Perspectives / The emerging situation in Afghanistan and options for India
Share

A few days back, the U.S. left the ancient city of Bagram, in the Parwan province of Afghanistan where they had maintained an air base for almost two decades. With this, 90 percent of the US forces in Afghanistan have left the country. The contingent remaining now is for guarding the United States Embassy in Kabul and Kabul International Airport. Along with Bagram Air Base, the U.S. has officially handed over seven facilities to the Afghan Ministry of Defense.

As the withdrawal continues, the Taliban, in complete disregard for the understanding that it has with the US, is busy taking over the areas being vacated. It is reported that its various factions have already taken control of more than 120 districts, thus expanding its influence from 73 to 195 districts.

The Government of Afghanistan is putting up a brave front even as its inability to stand against the Taliban onslaught is becoming quite apparent. It does not have money to operate its Air Force; its soldiers are crossing over to Tajikstan to escape the wrath of the Taliban.

The emerging ground reality is that the Taliban will play a bigger than expected role in the politics of Afghanistan, even to the extent of gaining absolute control. This is not good news for India since the country has backed the existing Government of Afghanistan to the hilt both politically and economically. Also of concern is the close relation of the Taliban with the fundamentalist elements of Pakistan and the ISI. Pakistan’s continued influence cannot be denied despite its claims that it no longer has any leverage over the Taliban.

It is imperative to recall the times from 1996 onwards when Taliban was in complete control of Afghanistan. When Russia withdrew from Afghanistan, the ISI had in its training camps more than  20000 highly motivated and well-trained Islamic Mujahideen hailing from across the world. A considerable number from among them were  diverted to Kashmir after organising them into terrorist groups like Al Badr, Harkat-ul-Mujahideen etc . They boosted the existing strength of ISI assets in Jammu and Kashmir like the Lashkar-e-Toiba (LeT) and Hizbul Mujahideen etc. This was the time when terrorism attained its peak in the region. It has taken the Indian security forces almost two decades of sweat and blood to contain it and bring it down to the existing levels where it is all but neutralised.

The ISI with its strong contact in the Taliban and especially so with the Haqqani group is very much likely to attempt another build-up of the terrorist network in Kashmir. While the US-Taliban agreement states that the Taliban will prevent terrorist outfits from operating on Afghan soil, there is little clarity on how the agreement will be verified and enforced. The threat therefore remains very real and very potent for India.

India also has considerable assets and infrastructure in Afghanistan created with the intention of assisting the government of the country. These assets have already been targeted by the Haqqani group. 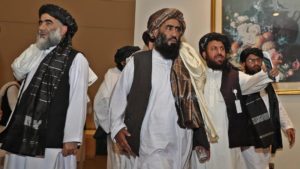 Negotiation with Taliban leadership is necessary

The international community is seized with the grave security scenario that is building up in the entire South Asian region due to the US withdrawal. Pressure has been and continues to be exerted on Pakistan to build dialogue with India. Pakistan however has played a very smart game, it has agreed to a cease-fire on the LoC but in the matter of talks it has laid down a condition of reversal to the pre-August 2019 status of Jammu and Kashmir. Pakistan knows full well that the Government of India will never agree to this demand. It has, therefore, kept open the option of increasing the threshold of violence in Kashmir when its assets created with the help of the resurgent Taliban are in place.

The Indian government has recently explored the possibility of moving internally by holding a meeting with the leadership of Jammu and Kashmir under the chairmanship of Prime Minister Narendra Modi. The success of the meeting has sent alarm bells in Islamabad; the Drone attack in Jammu is a direct consequence of the same.

In India’s favour is the fact that the Taliban presently is more interested in stabilising its control over Afghanistan and is amenable to talks. India needs to leverage this window of opportunity to broaden engagement with the more moderate and pragmatic elements of the Taliban and of course the Government of Afghanistan. Care has to be taken to ensure that those being approached are not proxies of Pakistan.  The reported meeting of Indian representatives with Taliban leaders in Doha, Qatar,  recently is a step in the right direction.

Indian representatives should be present in all international meetings, including those which involve Pakistan and Iran apart from Afghanistan. The backdoor channels, of course, need to remain activated. The assistance being provided to Afghanistan must continue and especially so in the domain of training Afghan Army personnel.

As the process of engagement with all players in the Afghanistan imbroglio continues it would be quite realistic to expect a considerable security disruption in Kashmir in times to come. The terror activities in Kashmir may not end any time soon, in fact, a serious attempt towards escalation is on the cards.

The silver lining is that the security forces in Kashmir led by the Indian Army are ready for any challenge posed to them by the malicious foreign forces. Foreign terrorists attempting infiltration will not find things as easy as the earlier times. The possibility, therefore, of the security situation in Kashmir taking a turn to the worse is very remote. The Government of India has the leverage of going through the diplomatic and political process without worrying much about the security situation.

It is in the interest of Pakistan and India to ensure a stable Afghanistan. Pakistan’s position is more tenuous since it will emerge as the fall-guy nation should Afghanistan descend into chaos yet again. It is hoped that Pakistan will understand the situation and work in the right direction instead of pursuing parochial, outdated goals.