Some acts and deeds are so profound that they change the course of history! One such is the martyrdom of the two younger sons of the tenth master of the Sikhs, Guru Gobind Singh Ji! The young and innocent boys, Sahibzada (Prince) Zorawar Singh and Sahibzada Fateh Singh attained martyrdom on 26, December, 1704, when they were brutally murdered by Wazir Khan the Mughal Governor of Sirhind.

The month of December has a special significance for the Sikh community. It was in this month that the combined forces of the Mughals and the small hill principalities used perfidious deceit to draw out Guru Gobind Singh, his family and followers from the Anandpur Sahib fortress and then sought their destruction. These forces, under Wazir Khan, promised (upon the holy Quran) safe passage to the Guru from Anandpur Sahib but attacked them with overwhelming numbers when they came out. The two Sahibzadas’ aged nine years and seven years, along with their grandmother Mata Gurjar Kaur got separated from the main contingent as they left the fort. They were promised refuge by an old retainer named Gangu in his native village Sahedi, but were handed over to the Sirhind administration of the Mughals, in what can be termed as the worst possible breach of trust and faith.

It is notable here that the main contingent of the Sikhs fought to the last man at Chamkaur where Guru Gobind Singh took up a defensive position with a handful of Sikhs. The elder sons of the Guru, Sahibzada Ajit Singh and Sahibzada Jujhar Singh attained martyrdom while fighting in the Battle of Chamkaur. He too wished to fight to the last but was disallowed to do so by his Khalsa who invoked the Panj Pyara tradition to order his to escape and fight for the Sikh cause.

Wazir Khan came back to Sirhind a defeated and frustrated man having failed to kill or arrest the Guru. He was filled with fear at the prospect of the Guru’s reprisal for the deceitful manner in which he had behaved. He was also scared of the wrath of Emperor Auragnzeb having failed to capture or kill the Guru despite having at his disposal a huge army that vastly outnumbered the Sikh forces. It was against the backdrop of this fear and frustration that he attempted subjected the young princes to the worst form of torture and intimidation with the intention of forcing Guru Gobind Singh to come to their aid.

He kept them and their grandmother in a Thanda Burj (a cold tower) that was designed to capture the cool night breezes of air drawn over water channels; a perfect place for the summers but very uncomfortable indeed in the peak of winters and that too at night, especially so for the very young Sahibzadas’.

Mata Gurjar Kaur refused to partake food made in the Mughal kitchen which enraged Wazir Khan. He passed an order that anybody attempting to assist the prisoners would be killed. Despite this order, Moti Ram Mehra, a devotee of Guru Gobind Singh who worked in the Hindu kitchen of the Mughals, secretly brought water and milk for the Sahibzadas to the Thanda Burj. This was a poignant example of humanity asserting itself even under the most terrible circumstances.

Guru Gobind Singh was not lured to Sirhind  since he had given a solemn promise to his Khalsa that he would stay alive to further the battle for justice and freedom. Wazir Khan then hit upon the idea of gaining control over the young Sahibzadas’ by converting them to Islam and then keeping them captive in his custody. Thisoffer was made to the Sahibzadas who rejected the same with absolute disdain which left Wazir Khan even more flustered and very angry..

Wazir Khan then subjected the princes to a trial in his court which lasted for two days. On the second day in court he tried to pass of the sentencing to Sher Mohd Khan, the Nawab of Malerkotla, whose two brothers had been killed in battle by Guru Gobind Singh. Sher Mohd Kahn exhibited the highest form of chivalry by refusing to take revenge from ladies and children and advised Wazir Khan to release the Sahibzadas’ and their grandmother, he left the Court when Wazir Khan refused to heed his advise. 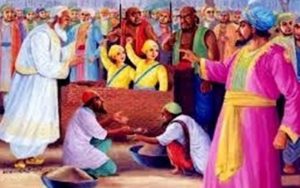 Chotte Sahibzade being bricked alive on orders of Wazir Khan

The next day, Wazir Khan once again resorted to torture and intimidation. He tied Baba Fateh Singh to a tree and told his soldiers to fire stones at him with a  Gulel (slingshot). One of the stones damaged the eye of the young prince who was again asked whether he would embrace Islam. The young prince put his hand on his damaged eye and shook his head to say that he would not do so. The Sahibzadas were also asked as to what they would do if they were to be released, to which they replied that they would go back to their father, collect an Army and destroy the evil regime of the Mughals, especially Wazir Khan. Wazir Khan then committed the most gruesome act which goes against all tenets of honour and principle. He declared the two innocent boys to be enemies of the Mughal Empire and ordered them to be bricked alive.

The courageous princes were incarcerated into the wall. The wall, however, broke down before the boys lost their breath and then was committed the most ghastly acts of all. Wazir Khan ordered the executioners to slit the throats of the young princes. On hearing the news of the martyrdom their grandmother Mata Gurjar Kaur also breathed her last.

The manner in which the two Sahibzadas’ stood against injustice and discrimination has no parallels in the annals of history. The ruthless depravity of their prosecutors constitutes the other side of the spectrum. The courage and fortitude exhibited by the young princes galvanised the Sikh/Khalsa community into rising against persecution and injustice.

Guru Gobind Singh Ji charged his disciple, Baba Banda Singh Bahadur, to avenge the murder of the Sahibzadas. Baba Banda Singh Bahadur came from Nanded (in modern day Maharashtra) to Punjab for the ordained task, Sikhs in large numbers joined him. He first took Samana and Sadhaura on the periphery of Sirhind and finally attacked Wazir Khan. The ensuing clash known as the Battle of Chappar Chiri took place on 22 May 1710. It witnessed the larger Mughal forces being crushed by the Sikhs. Wazir Khan was killed in the battle and Sirhind occupied in the next two days.

The martyrdom of the Sahibzadas’ thus heralded the creation of the Sikh Empire from the debris of Mughal as well as the Afghan principalities, changing the very destiny of the South Asian region in general and Punjab in particular. The Sikh Empire created by Maharaja Ranjit Singh, though short lived, is known for a just, benevolent and secular rule based in the tenets of law.

Independent India has witnessed a similar sense of righteous nationalism permeating from the small Sikh community that remains in the forefront of every national endeavour, be it safeguarding of the sovereignty of the nation or contributing to its progress and prosperity. All of this finds motivation, in no small measure, from the story of the young Sahibzadas’

There was a long standing need to disseminate the story of the Sahibzadas’ far and wide within India and across the world as a true example of standing up for what is just and righteous. Effort directed towards this end by the Sikh community and by the Indian government have resulted in 26 December being observed as “Veer Bal Diwas.” Now the story of the Sahibzadas is being narrated all across the nation in schools, colleges, institutions and communities and is motivating all humanity, especially the youth.

(Jaibans Singh is a reputed columnist and author. E-mail: jaibanssingh@gmail.com)