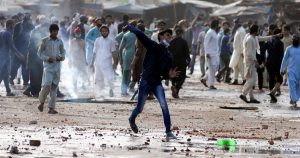 Pakistan emerged as a new nation on the globe on 14th August 1947 as ‘homeland for the Muslims of undivided India’ on the insistence of a strong Muslim lobby led by Mohammed Ali Jinnah. Jinnah used religion card for demanding India’s partition and succeeded in that but was ambivalent as far as the ideology of the new nation was concerned. Hindus formed about 15% of the population at the time of partition. In a press conference addressed by him in New Delhi on 13 July 1947 he announced, “All citizens of Pakistan will be treated as the same regardless of their caste, colour, religion or creed.” It sounded like music to the ears of the Hindu community that had decided against migration. Since Jinnah did not leave any written evidence of his thought process many questions emerged as to his idea of Pakistan ranging from did, he want a secular democracy or an Islamic State bound by Sharia or a modern Islamic Republic guided by Sharia and not bound by it? From the various speeches made by him contradictory messages emerged. However, one thing was obvious that a nation born on basis of religion can never be secular, which the minority Hindus failed to realise. Thus, the nation was born with an inherent contradiction. This gave rise to many other contradictions.

While all the majority ethnic groups of Pakistan could identify with one variant or another of Islam, they could not easily give up their linguistic identity. Consequently, Bengali speaking East Pakistan, Sindhi speaking Sindh, Pushto speaking North West Frontier, Baluchi speaking Baluchistan and Punjabi speaking Punjab till date have not been able to amalgamate into an Urdu speaking unified Pakistan. Whilethe other provinces continue to simmer with separatist and nationalist movements, Punjab is ripe for division with demand for a separate Seraiki-speaking South Punjab. In other words, nationalism in Pakistan was rooted in the “two-nation theory”—based on the ideology that religion, rather than territory or ethnicity, determined identity.

When Islam became the bedrock of nationalism it further gave rise to a majoritarian Sunni nationalism leading the nation into sectarian strife with Shias, Ismailis and Zikris relegated to minorities and the Ahmedias declared outsiders to Islam.

Islamic identity gave rise to another ideological contradiction of Geopolitics versus geo-economics and the then Pakistani leadership chose former over the later. Pakistan used religion to gain strategic importance in the area. Its ambition to become a leader of the Islamic world drove it closer to the Arab nations and Middle East at the cost of ignoring its neighbours in the South Asian region to which it actually belonged. A contradiction that haunts the nation even today and is largely responsible for the economic mess it finds itself in. 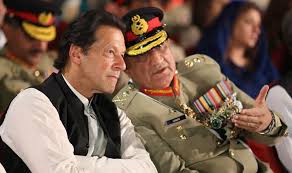 Imran Khan and General Bajwa; Out of Depth

Pakistan got its first constitution on 23rd March 1956 proclaiming it to be an Islamic Republic. The Constitution provided for a federal system with parliamentary form of government with familiar democratic rights. But the democracy was short-lived when the country came under its first era of military rule in 1958 which ultimately lasted for 33 years in three different eras. The elite class of Pakistan was unwilling to surrender the influence and authority it enjoyed. This led to the contradiction between a democratic egalitarian society and an elitist society giving rise to a neo-civil-military establishment opposed to egalitarianism.The elitist Pakistan promoted by the civil-military establishment resulted in social conservatism and the persistence of huge inequalities that further led to radicalism and rise of the Mullahs and Maulvis as a dominant factor not only in religious affairs but domestic politics as well.

The major contradiction in Pakistan is the role of Islam in public sphere. Despite declaring itself an Islamic Republic in 1956, it continued to be a moderate state till the end of 70s. However, thereafter both Bhutto and Zia ul Haq used religion to ensure survival of their governments. This set into motion the process of it becoming a theocratic state.  Sharia was declared the Supreme Law of Pakistan in 1991. Radicalism slowly gained deep roots in the state. In a recent survey done in Pakistan more than 70% of its citizens want Pakistan to be a Sharia driven Islamic State. The Mullah-Military establishment rules the roost in modern Pakistan. The military uses the mullahs to either remain in power or retain the power even when a civilian government is in place. Pakistan has plethora of radical outfits with many of them powerful to the extent that they are capable of bringing the governments to knee.

Tehreek-e-Labaik- Pakistan (TLP) is the latest such outfit to reckon with which has amply demonstrated its capability to take the nation to the verge of a civil war in the name of religion.Another offshoot of this contradiction has been the rise of Mujahideens, using jihad as an instrument for achieving social, political and strategic goals. Pakistan used them to create instability in Kashmir and gain strategic influence in Afghanistan successfully to some extent. Pakistan thus became a promoter of religious terrorism though it also claims to be its victim as well.

The latest unrest in Pakistan led by TLP has brought to limelight existing contradictions in Pakistan which have put it in a “self-destruct” mode. Imran Khan is facing the taste of his own medicine. When in opposition he had exploited many of these radical outfits for his political ends. Now as a “nominated” (pun intended. On paper he is elected) Prime Minister he has been forced by one such outfit not only to take a “U-turn” for which he is famous but also exposed his dual face. If Sharia is supreme in Pakistan, what is wrong in TLP demanding action against an act of blasphemy conducted in another country?

Imran Khan by agreeing to cave to the Islamists has exposed contradiction in in Pakistan’s foreign policy and external relations. While it has conceded to a parliamentary debate to expel the French ambassador because of blasphemous act of a French media house, it remains mum against ongoing repression of Uyghur Muslims in China. If Pakistan claims to be a “saviour of Islam” and desires to unite the Islamic world against “Islamophobia”, it has to display consistency in its adherence to the Sharia ideology and cannot be selective. In any case, due to these contradictions Imran Khan will have to face both domestic and external consequences. The fallacy of “Two-Nation Theory” is becoming obvious by the day and sooner than later Pakistan will have to take the final call of continuing with its religion dominated National Security ideology exploiting its geo-strategic location or make a 180-degree shift to more pragmatic ideology with geo-economics at its center.

(The author is a political commentator, columnist, security and strategic analyst)