You are here: Home / Areas of Study / Social & Cultural Studies / Urban Naxals: A Threat to the Bharat
Share 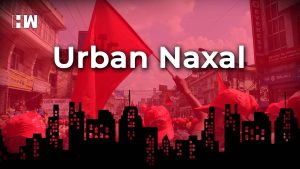 Urban-Naxals are intellectual militants of Marxist-Maoist-Leninist Ideology. Naxalism is a more violent, militant and terrorist variant of Marxism-Leninism which believes in uprooting the existing Nation-States and establishing their utopian classless-stateless society. So, the very idea of nationalism or ‘feeling of nationalism’ is inimical to their very thought-process. Urban-Naxals are their intellectual-supporters, sympathisers, and promoters who claim to fight through ideas, propaganda, ideologies, and narratives among India’s urban citizens. Unlike the real Naxals who fight on the ground in remote tribal areas with arms and ammunitions, Urban-Naxals live in the luxury of urban life and aim to disrupt the Nation’s very blood and veins they live through their intellectual-terrorism.

Opium for the Poor

True to their ideological-matrix of everything being just a reflection of control of ‘economic-structure’, all other aspects like religion, nationalism, culture are presumed fake and are held as the ‘opium for the poor’. Urban-Naxals derive their ideological-roots from Communist thinker Gramsci, who says that Nation controls its population through ‘force of political-military’ structure and the ‘consent of culture’, i.e. hegemony. So, not only the Nation is to be destroyed, but the very idea that it promotes the ‘feeling of nation’ must be destroyed. Their ultimate aim is to overthrow the existing nation-states and the feeling of nationalism and replace them with class-consciousness. Till they are not successful in bringing about their utopian Communism, they are dictated by their ideology to destabilise the existing nation-state and bring about anarchy and chaos so as out of this anarchy they can wrest the political-power to further their goal of withering-away the Nation and create a Marxist-eco-system.

For this, they are enjoined upon to use any means; extra-constitutional, illegal, spreading lies, misinformation and disinformation, social-media, legal-litigations, and use of loopholes in legal-system to wreck the very Nation itself. They do not desist from justifying violent and terrorist means. Surprisingly, they abhor loyalties that they call primitive loyalties like religious, caste, regional or tribal. Still, they use fault-lines in these religious-caste lines to instigate violence, creating chaos and destabilising the Nation. They claim to oppose the government in power, but they oppose the very country under the garb of opposing the government. They are intellectual-terrorist as they spread and promote the idea of secession, anti-nationalism and anarchy.

Here, a distinction must be made between an opposition-party and these urban-Naxals. Opposition-party exists in the very democratic-framework and fights for power through elections to further their agenda. They are rather welcomed as a criticism of government is seen as a sign of “healthy-democracy’. They disagree, oppose, protest, and even fight against government policies, but they do not question the very existence of India as a country, nor they propagate secession. They criticise the government with ‘constructive-criticism’ as they give an alternative to the narratives given by it. They must also be distinguished from a common issue-specific protest, which is very common in a democratic country, like India.

Urban-Naxals assume that if there is a progress of development, it must be at the cost of exploiting poor, tortured and desperate. So, the only ‘narrative’ of the urban-Naxals is to question everything, suspect everything and destroy everything. So, negativity, destruction and anarchy are their norms. They will find fault in anything and everything which is the idea of ‘India’. They disrespect India’s sovereignty and its national-symbols be it the very unity of India, its national-flag, its Armed Forces. They are not bothered about the law since it is the law of the capitalist class. Since their prime aim is to destroy the very nation-state itself, they build up their ‘narratives’ of anti-India be its historical past or the present or the progress of Nation in future.

There are broadly two categories of urban-Naxals. The first category is those who are not part of the system and set the ‘narrative’ from outside the system without being a part of the government. They may come under the guise of filmmakers, expensive-lawyers, award-winning producers, university-professors, historian, anchors, writers, human rights activists, poet, civil rights activists and environmentalists. The other category of urban-Naxals become part of the ‘system; and try to wreck Nation’s progress through using loopholes in the legal, judicial and constitutional systems.

They support, instigate and conspire for ‘civil-war’ in India. For example, celebrating the killing of 76 Indian paramilitary personnel at Dantewada, Chhattisgarh

They collect funds in the name of armed struggles and use it for their propaganda. Their source of fund is mostly from International groups, non-government organisations and anti-India movements. The source of funding is always obscure, illegal and unexplained.

One of the newest trends is ‘war of propaganda’, which has its roots in Communist-ideology. They spread misinformation, disinformation and fake-information through extensive use of social media. The new method uses Whatsapp, ‘trolling’, creating hash-tags and making the fake-ideas viral through web-channels.

Unable to create any movement of their own, they try to capture the movement as ‘parasite’ (Parjivi) to create social-tensions and unrest so as to establish protest-culture. If we have to summarise, we can say that Urban-Naxals are fighting an ‘idea-war’ against India. Therefore, we as a nation have to uncover their narrative and expose their narrative.

(The writer is National General Secretary of BJP)