You are here: Home / Areas of Study / International Perspectives / US exit from Afghanistan and its impact on India
Share

In the wake of the proposed US/NATO exit from Afghanistan, some major regional and geopolitical changes and some major disruptions are expected. Pakistan and Afghanistan, mainly the Taliban, are going to be in focus. Amid these developments, the situation in Kashmir may remain problematic for India. To comprehend the complexity in Afghanistan and its impact on India especially so on Kashmir it is imperative to understand the Afghan imbroglio and upsurge of the Taliban.

A large force comprising of Islamic Mujahideen was created under the arrangements of the CIA to fight the Soviet occupation (1979-1989) in Afghanistan. These Mujahideen were given safe sanctuaries in the rugged terrain of Pakistan bordering Afghanistan. The CIA trained and launched them into Afghanistan with support from Pakistan’s Inter Services Intelligence (ISI).

ISI, thus, became the focal agency for the CIA operations in Afghanistan. The entire militant set up functioned under its security; Osama bin Laden was one such militant commander under protection of the ISI. Many of the terrorists sent to Kashmir were also trained there.

As long as the Mujahideen were fighting in Afghanistan, they were treated as heroes by their mentors – the CIA and the ISI. However, soon after the withdrawal of the USSR, the situation changed and the Americans plugged their support/funding. The Mujahideen once looked upon as heroes became a liability in the region; they were left to fend for themselves.

As per one estimate, there were at least 20000 highly motivated and well-trained Islamic Mujahideen then taking shelter in Pakistan. After the departure of the US from the region, these fundamentalists,  who hailed from across the Islamic world, were loitering around aimlessly posing a grave threat to the local authorities. They were no longer under control of the ISI which was facing a challenge in managing them. Many of these militants were encouraged to return to their home countries and those who could not were diverted to Kashmir. They formed militant groups like Al Badr, HuM and so on and started operating in the valley.

However, since the Afghan Mujahideen essentially formed the bulk of the anti-USSR force, they were assigned a different and more important role of being reorganized into the Taliban to return to Afghanistan and capture power. It was a win-win situation for the US; the Mujahideen were happy and so was Pakistan.

After the consensus was arrived upon, the Afghan Mujahideen, by 1996, gained control of large parts of Afghanistan; they successfully seized power and ruled the land duly supported by the Pakistan army. A brigade size force of the Pakistan army remained clandestinely stationed in Afghanistan in the disguise of Mujahideen.

However, not all were happy with the US duplicity. Some like Osama bin Laden, leader of the terrorist group al Queda, felt cheated and started harbouring anti-US feelings, which eventually resulted in the terrorist attack on the World Trade Centre in New York on September 11, 2001; the attack is mostly referred to as 9/11.

Post 9/11, the US army launched major operations against al Queda in Afghanistan in which the Taliban and Pakistan troops were also uprooted. Ever since then the US forces have retained their presence in Afghanistan.

Now, after almost 20 years, the US has decided to leave. Though the US has a treaty with the Taliban the latter is reasserting its claim over Afghanistan. The al Qaeda, though hardly heard now, is reportedly getting revived again.

There is an assessment that despite being divided into different groups, the Taliban is all set to take over Afghanistan. It has reportedly already captured some territories on which it has no right in accordance with the understanding with the US. The legitimate Government of Afghanistan is contesting this move and fighting is reported between the Taliban and the government forces.

The Taliban are primarily independent bodies; Pakistan’s continued influence over them cannot be denied even though Pakistan claims that it no longer has any leverage over the Taliban 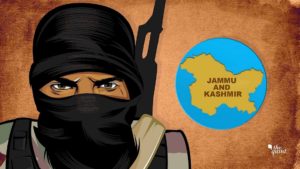 The fundamentalist forces in the region will attempt to divert their focus towards Kashmir under the watchful eye of the ISI. Furthermore, since the terror groups like LeT in Pakistan enjoy good relations with Afghanistan Taliban they will get assistance in pushing the agenda of the liberation of Kashmir.  The recent Drone attack in the Jammu belt is an indication of this direction. Taliban have been using Drones against the US in Afghanistan, though more as part of its psychological warfare.

The Taliban however would, in this initial stage, be more interested in establishing its ascendancy, capturing territories and stabilising  its control over Afghanistan. The talks between the Afghan administration and the Taliban are also taking place. If no single group emerges to take charge, Afghanistan may even veer towards a civil war; its bifurcation is not ruled out. There are reports that even Islamic State (IS) is becoming active in northern Afghanistan.

Countries like Russia, Iran and China are also monitoring these developments. They would be more than happy to fill the vacuum created by the US/NATO exit if an opportunity presents itself. India is presently involved in some development projects in Afghanistan which entail heavy investment, their future is doubtful. The Afghan government would like India to help find peace in the region, but will the Afghan government survive more than six months? China would be more interested in replacing India to spread its influence in Afghanistan.

The cease-fire on the LoC and the secret talks between India and Pakistan is possibly at the behest of the international community to bring stability in the region. But as of now there is no hope. Pakistan wants the reversal of Kashmir status as a precursor to any fruitful talks to which the Indian government is unlikely to agree.

The Indian government post-abrogation of Article 370 in Kashmir is now exploring a way to move forward internally. The recent meeting with the valley leadership is one such step. Ideally speaking, a solution to Kashmir should be between two parties viz the Kashmir leadership and the central government. However, in view of the aforementioned external dimensions, such a solution may not be easy to come by. The Valley leadership is, by itself, helpless in finding a solution because of contradictory positions. Because of this there is a suggestion, by a small segment of the Kashmiri leadership, to involve Pakistan.

The likelihood is that the region will continue to witness disruptions for quite some time and  therefore, the terror activities in Kashmir are unlikely to see an end any time soon. A In fact, a serious attempt towards escalation is on the cards.  There is definitely a perceptible decline in home grown terrorism but a boost from foreign based terror activities can turn the tables and disrupt peace.

India has successfully countered the terrorist threat in the past and is well placed to do so again. Unlike the US and the Soviet Union, India is not leaving Kashmir. They were fighting in a foreign land and had to withdraw from Afghanistan, India is not. The use of drones in Kashmir though a new development but nothing more than nuisance value like other terror activities. But yes, India cannot be complacent and would do well by retain focus on building  of confidence measures among its people.