You are here: Home / Areas of Study / Governance & Politics / When hit by the worst, use the best: Armed Forces for Covid control
Share A pandemic like COVID strikes the mankind, probably once in a Century, as per the historical evidence.  The second wave of the COVID-19 pandemic has caused unprecedented devastation in India. Having 04 lakh new infections daily and  over 4000 deaths every day, is a serious crisis. The health infrastructure of the country is stretched to near-breaking point.   We had successfully battled the COVID 1:0 last year and won accolades for it but it is said in Army – “Don’t declare Victory till the re-organisation is complete because enemy is likely to counterattack.”Same thing happened with COVID and when it counter-attacked, we were found basking in the glory of first success.

Learning from others across the globe, South Korea and Taiwan stand out. They have attracted international   appreciation for their successful suppression campaigns against COVID-19 by  effectively using their Armed forces for reinforcing civilian administration.    Our war on COVID is hampered by lack of organisation, coordination and management. The government must press into service its instrument of last resort, which has proven capability beyond doubt. India needs an honest, disciplined and swift response of a large scale befitting   the crisis. Only one institution’s name comes to the mind — the Indian Armed Forces.

Today India is struggling with control of Covid pandemic . The COVID situation is going out of hands with hapless citizens begging for care and mass cremations/burials. The deaths due to Covid are more than the total battle casualties, we have had so far in last 74 years of Independence. Yet the State seems to be shy of optimally utilizing its instrument of last resort — “The Armed Forces.”  It’s very aptly said that “When you are hit by the worst, use your best weapon to counter it.’  There has been a clamour from public, institutions and courts to call in the Army but the Govt has been hesitant to fully deploy the Army and optimally use this valuable national asset  available. We are already late in decision making and   paying the price for delay by loss of human lives every day.

Last Hope of the Nation.  The Armed Forces are the last hope of the nation. They are called in when everything else has failed and it’s a matter of pride that they have never let-down the nation. History is full of examples when armed forces were called in against external aggression like Liberation of Bangladesh in 1971, Kargil intrusion in 1999 or revenge of Pulwama  massacre. Similarly, in national calamities like Gujrat earthquake, Tsunami in A & N Islands or Delhi Riots in 1984, they have done a praiseworthy job   and saved thousands of lives. Based on past glorious record, the nation again wants to repose faith in uniformed people to rescue them from this deadly pandemic.

Suitability.  Armed Forces have no magic vend. The primary strength of the forces is the command centric organization of 1:5 million, trained and disciplined personnel, vaccinated and ready for crisis management, Pan India.  Some of the great organizational strengths which make it the most valuable and   suitable resource in fighting COVID 2:0  are flagged as follows:-

Organised and Trained Resource.   The 15 lakh strong force in Armed Forces is the most organised and trained human resource available. The  are known for sincerity, hard work and dedication   beyond doubt. Approx 30% force may be deployed on border security duties but approx 70% is available to fight the COVID crisis, for the nation.

PAN India Presence.   Armed Forces are present in all parts of the country and they can spring into action in no time, to control   the situation.

Logistics Chain Management.  Defence forces are masters in logistics management wherein they have to supply arms, ammunition, clothing, rations and medical resources right from source of production till the border, in most inhospitable terrain and conditions.

Networking and Communications.   The Armed Forces have their own communication setup and digital networking to establish a grid of Command and Control Centers and nodal points.

Transparency and Efficiency. The efficiency of forces is proved beyond doubt and similarly, when they work with transparency to weed out corruption and favoritism in the allocation of resources, the faith in the governance will be restored and the morale of the country will go up. 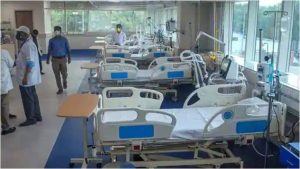 Medicare.  There is  critical shortages of Medical staff.  Armed Forces have their dedicated state of the art medicare facilities. There are about 130 Military Hospitals, and  all have capacity to enhance facilities during war.   Another 100 field hospitals with approx 100 beds can be created quickly for controlling the epidemic. Similarly, large size ad-hoc Covid Care Centers, like one named as DRDO Hospitals, can also be created.   Military engineers can convert requisitioned buildings/sheds/factories into hospitals and also construct new ones using prefabricated material.Recall of retired Armed Forces Medical Corps (AMC) personnel  is an excellent idea, which should have been done in early April 2021.

Vaccination at War Footing.   Vaccination drive needs to be carried out at war footing, to remain ahead of the disease. In addition to Army Medical Corps personnel, we also have combatants trained as Battlefield Nursing Assistants (BFNA). They can   be effectively utilized  for  assisting  in vaccinating the population at war footing, along with local health care workers.

Supply Chain Management.  Presently, there are obvious serious logistical supply chain anxieties. It is stated that the country has credible oxygen-manufacturing capacities, yet people are dying for want of oxygen.The Indian Air Force (IAF) and the Indian Navy have done well to post-haste transport oxygen containers and tankers from abroad and within India. Expertise of Defence Forces logistics supply chain management can be very well entrusted with enhanced production, movement and timely delivery of oxygen, drugs and life saving equipment. The present corruption and favoritism will also be eradicated with   fair and equitable distribution of resources, in the hands of Army.

Organised Labour Migration.   The migration of labour during 2020 COVID first wave left much to be desired.  The government did not use  the Army to manage the migrant labour exodus. Armed Forces with PAN India presence can perform this task in very efficient and organised manner. Nodal Collection Centers for Registration and movement in civil hired transport provided to Army, could help leave the migrant labour to their destinations with safety and logistics support  enroute.

Area Sanitisation and Prevention.  Prevention is always better than cure.  There is need for area sanitisation to prevent spread of the disease. All armed forces stations have a Station Health Organization, which is capable of performing the task, given the resources. The civil resources can be also co-opted to undertake an effective area sanitisation drive.

Rations Distribution.   The Armed Forces expertise in handling supply of rations during war and peace could come in handy for distribution of essentials in the containment zones.

Crowd Control.   As part of Aid to Civil Administration, Armed Forces are trained in crowd control. They can also be used to augment civil police force in crowd control during lock down. Similarly, crowd at hospitals getting unruly, can also be controlled by assistance from Army.

Decent Last Rites.  The COVID fatalities are rising. The nature of the disease puts brakes on neighborhood participation in last rites. More often the kin are also affected and  hospitalized, making the problem more acute. There is no organization, except some NGOs,   which is taking care of   cremation/burial of dead bodies. Armed Forces are trained for last rites of their soldiers in war like situation. They have the procedures  and training for the same. Hence, this onerous yet essential task could well be entrusted to Defence Forces

Command and Control.   The whole Govt machinery appears to have been paralyzed with poor responses to the public needs. Inter Dept coordination seems to be missing. Army is known for it’s Command and Control methodology. Within own resources, National Monitoring and Control Center could be established with satellite Coordination Centers for each sub function. Similarly, Sub Command Centers can be established at State and District levels to coordinate and control resources, with dedicated communication and data networking.  Regular press briefings by these  War Rooms will  immensely help in  fighting rumor mongering and control panic among the  public.

The pandemic is a calamity, a national security challenge, that one has not witnessed in life, and will have far-reaching implications on the nation. There would be naysayers, cautioning against the external threat and primary role of the armed forces. However,  the  Armed Forces involvement in the dire-pandemic situation must be founded on the ‘Doctrine of Necessity’. The well-being of the peoples of India is an essential task for the Armed Forces  and they have the competence to undertake it.

The Armed Forces have never failed the nation and yet again they will deliver. The need is to identify the magnitude of the problem and take decision to use the best available resource. Valuable time has already been lost.   A free hand should be given to Armed Forces with emergency powers and all other concerned Departmentsplaced under their command. The egos may prevent this but human lives have more value than ego.