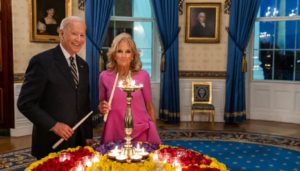 Nothing can be a greater celebration of democracy than the world’s oldest democracy recognizing one of the major festivals of the largest democracy in the U.S. Congress. As a proud Hindu and American Indian, I characterize and cherish the Act as – DEEPAVALI FOR DEMOCRACY.

2021 Deepavali or Diwali, a major festival for proud Hindus globally, marks a historical day with legislation to declare Diwali as a federal holiday. It is a proud moment for every Hindu and anyone believing in the tenets of Sanatana Dharma anywhere especially in the United States.

It will be a travesty if any Indian American behaves as a reluctant individual when a “White” Congresswoman, Carolyn B Maloney, introduces the first-ever bill in the House of Representatives to declare Diwali, the festival of lights, a federal holiday. Note her momentous words, “I’m very, very happy and excited to be introducing the Deepavali Day Act this week alongside members of the Congressional Indian Caucus, which will enshrine Diwali into law as a federal holiday.”

Maloney went on to add, “I am very proud to celebrate with you the victory of light over darkness, the triumph of good over evil and the pursuit of knowledge over ignorance as we do every day. It is truly appropriate that Diwali this year symbolizes our nation’s continuing journey out of the darkness of COVID-19….”

If that was not enough, she added, “Celebrations like Diwali speak to the core of what we all desire for our nation to be a beacon of happiness, healing, learning and light and uncertain times.” Could any of us- the Indian Americans- say it with greater pride, more profoundly, and clarity for our own festival of light? Yet, it is distressing that there are reluctant Indian Americans who are questioning the spirit of the Act. They are perhaps under the deeper darkness of ignorance requiring laser light and not ordinary traditional earthen “Diyas” to pull them out of the darkness. Of course, everyone has the right to freedom of expression because celebrating Diwali too is part of democracy.

I wonder if Maloney was taking cues from Modi’s way of confronting the first wave of COVID-19 in India in April 2020? Readers may recall that Modi asked and entire India came together for nine minutes at 9 pm on April 5 to “march against the darkness towards the light.” It was Modi’s way to cheer people who had been under complete shutdown due to the raging COVID-19. It was a kind of Diwali celebration in April when he asked for lighting candles and lamps or switching on flashlights and electric torches. That was the display of Modi’s unusual leadership to bring the country out of COVID-19 darkness to lighten the human spirit at least for those 9 minutes. 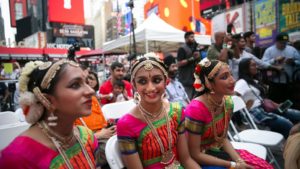 Diwali celebration in the US

One of our own Indian Americans,Congressman Krishnamoorthi, complemented and completed the rest of the story about Diwali when he said: “On this holiday of Diwali, we should say, be the light you wish to see in the world. Be the light in your community that is needed to dispel the darkness. Be the light in this community that brings hope to the hopeless. Let us be the light that helps the last, the least and the last.” What a strong testimonial for India’s heritage, culture, and valuesfrom someone who knows it well as an American Indian.

Another Congressman Gregory Meeks, Chairman of the House Foreign Affairs Committee, declared his support for the Act. He said, “This is something that should be shared with all of us in American society. It’s a good day because we’re talking about light over darkness. And that’s what this is about.”

While Hindus and Indians must celebrate this historic Deepavali Day Act, I want them to think of 2021 as just the beginning for India and American Indians to be proud of with more to come. First, October 2021 was proclaimed Hindu Heritage Month and now Deepavali Act Day. What a triumphant 2021 with two major successive events? Let us keep the momentum going as united Hindus and American Indians so no right-minded individual or group dare dream again to dismantle Hindutva and Hinduism.

To my fellow Indian Americans, take pride in your achievements. It is a recognition for who are Indian Americans and Hindus, and their collective contributions in all aspects of cultural, economic, social, political, education, spirituality, yoga, meditation, Vedanta philosophy, Ayurveda, classical art, drama, and music, literature, generosity, and community service. Your head should rise higher and you should feel proud that American Indians, particularly Hindus, are leading successful careers in almost all professions like physicians, lawyers, scientists, economists, philosophers, artists, academics, business leaders, government officials, politics, information technology, and engineers, pharmacy, retail industry, and others.

Note the notable phrases signifying the essence of Diwali- light over dark; good over evil, and knowledge over ignorance, and celebrate all of them with pride. As a lifelong educator, I firmly believe that the lack of good education in rural India is the biggest evil and Diwali must bring them the necessary resources. I am proud of supporting Vidya Gyan, an NGO offering resources to government schools in rural India, which promoted the message, “VIDYA nurtures hopes, dreams and GYAN.

Let me underscore that those proud moments such as Deepavali Day Act in the U.S. House come rarely. The persistent Congresswoman Maloney brought to bear the needed pressure for a commemorative Diwali postal stamp in 2016 and now the Deepavali Day Act. How often do you have such a strong supporter for Hindu cause among the U.S. leadership?

Therefore, may every Indian American seize the moment to cherish, celebrate, and come together for promoting an abiding friendship between the two strong democracies. Let all Indian Americans write to her/his Congressional delegation in support of the Act because your voice matters in Deepavali forDemocracy momentum. Let the brightness prevail over darkness for all Indian Americans and may they take pride in an emerging One New India of the 21st century.

(Vijendra Agarwal is an academician and co-founder a US-based NGO, Vidya Gyan)