You are here: Home / Areas of Study / National Perspectives / Harvesting Souls In Punjab: How The Evangelical Ecosystem Targets Sikhs
Share 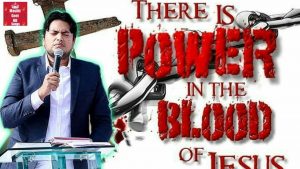 After the arrests of the Sikhs, “Bishop P J Suleman, who was flanked by representatives of various Christian organisations, including Punjab Christian Movement (PCM), said they were satisfied with the police action in this case” (‘Christians call off protests after arrests in video episode’, Indian Express, 28 June, 2017).

This is not the first time that the Christian community in Punjab has angrily reacted to the “blasphemy” of Sikhs against their God. On 22 May 2001, Satnam Singh, a 70-year-old lawyer, was arrested for his book on Sikhism. It had a chapter on Jesus in which the Christian deity was depicted in an unfavourable light. That was in the 1999 edition of the book. In the 2001 edition, the objectionable passages had been edited out. Even then the Christian leaders were not satisfied. They demanded the arrest of the author. Satnam Singh was arrested and, after he got bail, later offered to apologise, though the Christian leaders questioned his sincerity (Christianity Today, 1 June 2001).

The confrontation between Sikhism and Christianity is neither sudden nor relegated to isolated events. In fact, the reaction of Sikhs, which had attracted media attention in a highly unfavourable manner, is the result of Christian invasion and evangelical war on Sikhs that spans the last two centuries.

Sabu Mathai Kathettu, a Christian evangelist from Operation Mobilisation (deceptively abbreviated as “OM”), published in 2009 a report assessing Christian evangelical work in Punjab. Published by one of the apex protestant institutions in India with global connectivity, the Indian Society for Promoting Christian Knowledge (ISPCK), the book provides not just a historical account but also the theological position and methodology for conversion of Sikhs to Christianity. It shows the kind of monumental global adversary against which are pitted the rural Sikhs of Punjab. 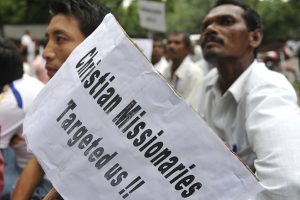 A protest against Christian Missionaries

The book’s author is well aware of the incompatibility of the fundamental tenets of Sikhism with those of Christianity. This has even created a hurdle in approaching the Sikhs, he points out:

(The missionaries) preached that all people are sinners, and Christ is the true Saviour. The concept of all people as ‘sinners’ was objected to by the Hindus and Sikhs because it was different from their philosophy. For them it is difficult to recognize that they are sinners!

Note the exclamation point, as if it is a natural thing for people to think of themselves as sinners. And the Sikhs and Hindus are shown as if they have some learning disability – difficulty in recognising that they are sinners.

The Sikh concept of god is also contradictory to the Christian concept of god. For Guru Nanak, the god is “loving and gracious but He is never angry or shows wrath towards humankind”. In contrast, when the Christian god’s “righteousness confronts human sinfulness it becomes wrath because God is holy and abhors sin.” Further, Sikhism dismisses “the uniqueness of Jesus as the Son of God and the only way to God”. In addition, the book says “the Sikh doctrine of Ek Onkar, the Absolute Oneness, rejects the Biblical concept of Triune God.”

So evangelism is needed. The book clearly states the obvious that all humanitarian work done by Christians is only a means for conversion. However, despite British-engineered famines ravaging Punjab, they could not attain much success, so they changed strategies.

Evangelism was the ultimate goal of mission societies and ministries such as education, medical care and literature were seen as channels towards evangelism. … Progressively, the missionaries changed their strategy and adopted the ingenious methods to present the gospel.

Mathai says that still “the missionaries did not have a proper strategy to reach the Sikh community.” So they decided to convert the ‘high castes.’ Mathai unwittingly busts a big missionary propaganda line that missionaries were genuinely attracted towards the poor and the downtrodden. They actually went for the so-called upper castes. When they could not convert them, they turned to the so-called lower castes. No humanitarianism here, only a change of strategy.

They realised the importance of reaching the Hindu high caste people in Punjab. Stock says that the Christian missionaries were convinced that winning the high caste was the key to evengelising the country as a whole. … Later the missionaries turned to Chamars and Mazhabi Sikhs of the lower caste.

Even here there was a failure. The converts were seen as kind of collaborators with the British, people who had gone out of Indian culture. In a revealing line, Mathai writes that “it was evident in 1857 when the Indian Mutiny broke out…” It is revealing for the use of the term ‘Indian Mutiny’. It shows from which point of view a modern evangelist born in independent India approaches the problem.

When it comes to independent India, Mathai writes how evangelists are using the modern visual communication system. The Indian state machinery is also co-opted in this evangelical war against Sikhism.

Christian Broadcasting Network (CBN) is screening gospel programmes through the national channel Doordarshan in Hindi. In Punjab churches and mission agencies use Jesus or Dayasagar films in outreach programmes. Sikhs respond to these programmes well. At present a few fundamental Hindu and Sikhs are fiercely opposing the screening of these films.

Still there are problems. They are not winning the conversion battles. Mathai points out the possible reasons and starts suggesting remedies.

The pattern of worship, customs, and church buildings are not inculturated and are the same as the missionaries left behind. Therefore the Sikh community does not understand the core of the gospel message. The churches of Punjab should modify their mission strategy to reach the Sikhs effectively. The gospel of Christ should be incarnated in the context of the Punjab. The pattern of the church and worship should be inculturated in a way the Sikhs can understand.

In enumerating the hurdles, one is frighteningly interesting. The Sikhs are successful, self-confident and content, and there Mathai sees a problem.

Most Sikhs are well settled and secure as they feel satisfied with their own religion. Wealth is a great hindrance to them for accepting salvation. … Because of wealth they have developed strong personality and personal security that has instilled in them a kind of pride that they can survive anywhere in the world. The Christian worker, or the church, must make a strategy to witness to the Sikhs regarding their appetite for the material things.

One is left to wonder what kind of a religion wants to destroy the self-confidence and success of a community of people so that it can spread itself.

Then he details how to evangelise through inculturation – which is essentially creation of theological confusion in a community.

… for effective inculturation, Satsang style of worship services should be conducted in the local languages with Kirtans accompanied with local music. Also singing Bhajans should be included in worship. Bhajans and Kirtans are the appropriate method for communicating the Word of God effectively to the Sikh community. … Every morning and evening the scripture should be broadcasted from the church as is done in the Gurudwara. In such cases laws regarding the use of microphones and loudspeakers should be adhered to in government restricted areas. … And after the worship service the believers should share fellowship around a communal meal like the Langar.

Note the intentional confusion of symbols and spiritual entities exclusively rooted in Sikh culture and religion. Note the creation of competitive use of loudspeakers that can create social strife. And note the caution so as to escape government monitoring. The methodology of blatant deception continues.

Christian workers should also learn and use Punjabi terms. The church can be called Kristh Gurudwara or any appropriate words can be used. … Also the term ‘pastor’ or ‘priest’ can be replaced by ‘Granti’ or ‘Giani’. It is best for believers to be called Isa da Sikh.

Even the life-cycle rituals are not spared.

The most important ceremony is that of Pahul or baptism, usually administered at puberty. The initiate takes Amrit nectar and is admitted to the Khalsa fraternity. The concept of Pahul in Sikhism is similar to Christian baptism. Therefore the Pastor should be able to critically evaluate it and adopt the good elements of it.

Note the condescending theo-supremacist tone. The pastor will critically evaluate and judge and adopt the ‘good elements’ in a ritual central to Sikhism. Lest we think the missionaries are indulging in crass deception, the usual tool of historiography that would do a Romila Thapar proud is employed to justify the evangelical deception. The Sikhs appropriated the Hindu festivals and we are doing the same to them.

It is conveniently forgotten that Sikhs did not appropriate Hindu festivals with the ulterior motive of converting them. Neither did they appropriate nor did the Sikhs inculturate. The festivals have evolved in India with their own local narratives. There are no clever intentions or artificial instructions like the ones given here. They are symbols of pluralism that underline India’s spiritual cultural unity and not tools of expansionism.