You are here: Home / Areas of Study / Communism / How India’s communists are betraying the nation
Share 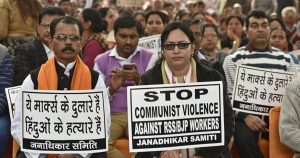 The Communist Party of India (CPI) is one of the most controversial political parties in the country. Founded in 1925, it is alleged to have been directly involved in several anti-national activities since its inception. Though misleading articles from leftist sources claim CPI fought for India’s independence from the British rule, the truth cannot be further away from this claim.

During the Second World War, when freedom fighter Subash Chandra Bose was attempting to build an international alliance to counter the British empire with a pursuit to free India of British rule, the mouthpiece of the undivided CPI ‘People’s War’ published sketches of Subash Chandra Bose being led by General Tojo by holding his hand. Another illustration from the same magazine showed Bose being thrown in a circus by a man donning the Nazi Hakenkreuz.

This was because the USSR was fighting against Germany and Japan at two fronts while Bose lobbied with the two countries to overthrow the British from India. CPI had compromised its integrity to lick the boots of the Soviets, from whom they allegedly received funds even after India’s independence according to former KGB agent Mitrokhin’s Archives.

During the 1962 war between India and China, the Indian Communist parties issued a diktat to their party cadre that they shouldn’t donate blood to Indian soldiers. Several Communist leaders had backed China during the war and supported the country’s stance.

The Communists openly said ‘China’s Chairman is our Chairman’

Merely 8 years after the Indo-China war, the Left front in India put posters all over West Bengal which said ‘China’s Chairman is our Chairman’, very openly showing their allegiance to the Chinese Communist Party (CCP) and Mao Zedong. Despite hostilities arising between the two nations in 1970s, the Communists seemed to have very openly challenged the nation’s patriotic sentiments.

The Communists received funds from USSR and China

A declassified report from the CIA reveals that the CPI and breakaway CPI (M) were funded directly by China and USSR respectively. The two parties received funds “through a combination of kickback schemes, normal business transactions and direct cash payments.” “In addition to party funding, the Soviets channel money to individual Congress and opposition politicians (through) clandestine payments. This cash is reportedly obtained from the favourable Soviet trade balance,” said the document titled “The Soviets in India”, which is one of the millions of CIA memos declassified in 2011. Mitrokhin Archives allege that CPI and CPIM received funds through several bizarre ways during the cold war, including through car windows during Delhi traffic!

At several instances, starting from the premiership of Pundit  Jawaharlal Nehru, India’s Intelligence Bureau had intercepted transfer of funds from USSR to CPI. However, these were given a blind eye by the many puppet prime ministers who have ruled the country since then. Such activities continued right up till the fall of USSR.

The Communists carried out Marad Massacre of Hindus in Kerela

On the Marad beach of Kozhikode in Kerala, 8 Hindus were murdered by 62 Muslim workers belonging to CPI (M), Popular Front of India and Indian Union Muslim League. The attackers hacked the innocent Hindus in broad daylight and then proceeded to hurl bombs and other explosives at nearby areas.

The Communist Sitaram Yechury attended a conference organized by CCP

In October 2015, Sitaram Yechury (President of CPIM) visited the International Conference of Asian Political Parties (ICAPP) organised by CCP in China. In the meeting, Yechury said that the CPI (M) values ties with the Chinese Communist Party (CCP). He even went on to discuss the foreign policy and economic policy of India with Chinese officials.

The Communists did not condemn China after Galwan Valley clash

After the violent clash between Indian and Chinese soldiers in Galwan Valley of Ladakh, the CPI (M) issued a statement which did not condemn the Chinese aggression in the area. In fact, the party blamed India for the clashes through its mouthpiece.

“Whatever egregious actions by China, the positions adopted by the Government of India have also contributed to such a situation developing,” the editorial stated. The editorial magazine also blamed the Union government’s increased leaning towards USA as the reason behind the clashes and worsening bilateral relations.

India’s communist parties have started to lose their autonomy and are slowly becoming puppets of China. It has had a long history of being funded by foreign countries and has continued this trend. With each passing day, the Communist parties of India are proving that they are nothing more than mouthpieces of their bosses in Beijing.