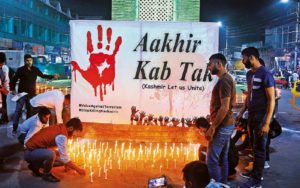 A good political leader always feels the pulse of the people and modifies his policies accordingly; those who fail to move with the times become politically irrelevant. The leaders of the so-called mainstream parties of Kashmir, mainly the National Conference  (NC) and the People’s Democratic Party (PDP) are, sadly, unable to adjust to the new reality of Kashmir.

Their mindless opposition to all that is good, nationalist and Indian has become a bane, not only for them but also for Kashmir. Their constant criticism of the system is a big tool in the hands of the terrorist recruiters for their indoctrination process. By quoting the stand of these leaders, the recruiters convince young impressionable minds that the cause of separatism has the support of the leadership and the people.

Take for instance the latest statements of Mehbooba Mufti. A few months back she glorified the Taliban takeover of Afghanistan and termed it as a defeat for the United States. She then gave an oblique warning to the Government of India of a similar situation erupting in Kashmir in case Article 370 is not repealed. “Don’t test our patience and change your ways while you still have a chance….,” she said. Such divisive rhetoric is not expected from a person who has been chief minister of the state. She has paid no cognisance to the fact that there are apprehensions of the Taliban joining with Pakistan in creating trouble in Kashmir and that a unified approach is required to offset the threat.

In recent days she has been denouncing the Bharatiya Janata Party (BJP) and the Rashtriya Swayamsevak Sangh (RSS) as communal manifestations in India of the terrorist organisation Islamic State (IS) that is an avowed enemy of the Indian Nation . She has openly stated that the BJP/RSS are attempting to divide Hindus and Muslims. “…It’s the RSS, the Jan Sangh and the BJP who are communalising the situation by making people fight all over the country,” she is reported to have said. It is not without reason that she is termed as a “conspiracy specialist.” She has the ability to unearth a conspiracy everywhere.

Has Mehbooba paused, even for a minute, to reflect on the impact that such abrasive statements would have on young impressionable minds or how they will cause a setback to the ongoing process of resettling the Kashmir Pandits in their traditional homes in the Valley. 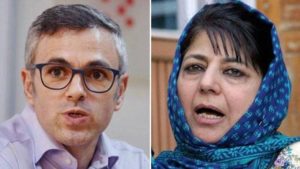 Omar Abdullah of the NC may not be as blunt and scratchy as Mehbooba Mufti but the connotation of his statements are the same as hers. He continues to be a big votary for reinstatement of Article 370 and the pre-August 2019 status of the region. He loses no opportunity to term the process that brought about the changes as unconstitutional, knowing full well that it is absolutely constitutional and legal. Omar keeps hinting at a deteriorating security situation in comparison to what was prevalent when he was chief minister with selective amnesia about the massive riots that took place in Kashmir from 2008 to 2010 under his watch. By constantly referring to such matters, he ensures that the change in the constitutional status keeps rankling the people and creating doubts and insecurities in their minds.

It is no wonder then that the terror mongers in Pakistan lose no opportunity to play upon the sense of insecurity being created and continue to come up with new and innovative ways of keeping their diabolic agenda alive. The latest in the book of dirty tricks is targeting of civilians, particularly those from the minority community. In pursuance of this meticulously planned, sinister policy there have been 11 deaths of innocent people from the minority community due to terrorist strikes in the month of October. Would the so- called leaders of the mainstream parties introspect on their role, albeit indirectly, in what has happened?

The vested interests of the terrorists and local leaders who do not wish to see peace and stability in Kashmir are unlikely to succeed.

The security forces are well in control of the situation with complete support and confidence of the people. Worst has been seen in the valley and there is a self-belief in nullifying this challenge posed by the terrorists. The centre is willing to improve upon the security grid with additional forces but in this too the self styled leaders of the people will create a hue and cry. It is so sad to note that the people understand the situation but their leaders do not.

There is no possibility of the current status of the region being changed to what existed earlier, so Mehbooba and Omar are holding on to impractical dreams. In time J&K will get an elected legislative assembly and also statehood as promised by the centre. With some more parties joining the fray there is also a possibility of new leadership emerging. It is then that the dynastic politicians will realise that ruling the region is not their birth right and it is time for them to work for a living. The situation will pave the way for the democratic process to gain firm roots. It will also pose an acid test for the leadership to prove its worth, to stand up and be counted.

The local political leadership in Kashmir should be working on improving their political constituency within the new framework in a positive manner. Only then will they remain politically relevant; this is the time to introspect and make much needed mid-course corrections