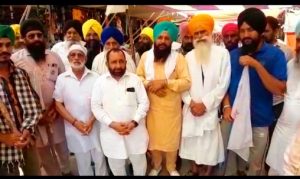 Screen shot from a video: Local Hindu priests being compelled to say that they will not interact with BJP/RSS

A shameful incident of politically motivated mob violence has come to light wherein a respected social worker has been targeted while on a private visit in District Ferozepur, Punjab. The targeted person is Shri Ram Gopal who is the State head of “Haryaval Punjab,” a social welfare organisation dedicated to promoting organic farming, sowing and growing useful trees and greenery, management of plastic waste and similar projects all over Punjab.

The incident happened on 13 April 2021, at the Malla Wala area of Ferozepur District. Ram Gopal was visiting the general area as a part of his duties. After paying his tribute at the National Martyrs Memorial in Hussainiwala he came to Ferozepur, attended a function and then went to meet his friend Dr. Mangjit Singh at his house in Village Nihala Lavera. The mob attacked him when he left the house of his friend around 7 PM.

It is well known that certain powerful forces are against the good work being done by environmentalists and social workers since the work goes against their commercial interests which are dependent on over exploitation of the natural resources.  It is for this reason that Sh. Ram Gopal has been designated for Y-Plus security by the Union Ministry of Home Affairs. This implies that he has a permanent  escort from the CISF and is also supposed to get security from the local Police in the areas where he is visiting.

Accordingly, he was under Police escort when the attack took place. Since the attack carried on for a considerable period and a considerable distance between two villages, Nihala Lavera and Bagga Ke, there was adequate time for the police escort with him to call for reinforcements and take necessary action in accordance with the standard operating procedure. Yet, the police failed in performance of its duties and the mob managed to damage the vehicle in which Shri Ram Gopal was travelling.

The First Information Report (FIR) registered with the office of the  Senior Superintendent of Police, Ferozepur gives a detailed account of the manner in which the Police, instead of assisting in the smooth exit of Shri Ram Gopal, facilitated the mob in catching up with the cavalcade, heckling the persons, breaking the window panes of the vehicle and posing a massive security threat. It was due to the presence of mind and professionalism of the CISF escort that the party managed to exit the area.

The only reason for subjecting Shri Ram Gopal to this security risk and humiliation isthat he is associated with the Rashtriya Swayamsevak Sangh (RSS). The agitators who were armed with deadly weapons posed to be farmers who did not want any functionary of the Bharatiya Janata Party (BJP) or the RSS to visit their areas. Later, they posted videos in which the local priests and other local Hindus were compelled to say that they would not entertain BJP/RSS functionaries in future.  It is notable here that the RSS has absolutely nothing to do with the legislation of the three Farm Bills under whose cover this “mobocracy” is being carried out.

Shri Ram Gopal, in particular, is not even remotely involved with politics. He is not a member of either house of Parliament or the State Legislative Assembly. He is, since many years, involved only in the noble work of improving the environment in Punjab in which direction his organisation and he personally have made a sterling contribution. While in Ferozepur, he did not address any public gathering or speak about the Farm Bills.

It is quite obvious that the attack of Shri Ram Gopal was carried out to send out a political message. The goons at the behest of some political masters wanted to convey that the BJP/RSS will not be allowed to carry out any activity, let alone political activity. It was not Ram Gopal but the institutions that were under attack. The reason is a fear of political marginalisation due to the decision of the BJP to contest legislative assembly elections in all constituencies post its break up with the Shiromani Akali Dal (SAD).  These goons at the behest of powerful political forces have been given the responsibility to forcibly nip in the bud all possible competition before the state assembly polls scheduled for 2020. It seems that the ruling dispensation is also a part of this conspiracy.

Such attacks have been carried out at regular intervals ever since the Farm Agitation commenced. Earlier on 12 October, 2020,  Punjab BJP President Ashwani Sharma was attacked by a violent mob in Hoshiarpur while he was travelling from Jalandhar to Pathankot. A little after that, the houses of many BJP leaders were surrounded by violent mobs and in one instance tons of garbage was thrown outside the house of a senior BJP functionary. The state government did not take any action against the assailants who gained the confidence to carry out more such attacks. 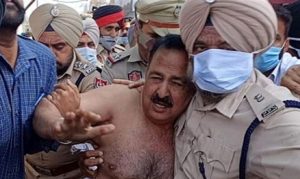 The practice continued till the shameful incident on 27 March 2021 when BJP MLA from Abohar, Arun Narang, was attacked by a mob of so-called farmers, actually political activists. His clothes were torn, black ink was thrown upon him and he was thrashed mercilessly. In this instance too, the police remained a mute spectator, refusing to take any action to control the crowd. “I have a hunch that the state government could be behind it. It needs a thorough investigation. I don’t trust Punjab police now, ” said Narang in a forthright manner after the attack.

The BJP lodged a strong protest and carried out an agitation. It does not seem to have had any effect on the authorities as is apparent from the manner in which the recent attack on Shri Ram Gopal has been carried out.

Within days of this unfortunate incident Bachittar Singh, a former leader of Bhartiya Kisan Union (Sidhupur) issued an open death threat to senior RSS and BJP leader HS Grewal. What action has been taken by the police is not known.

The SAD is using its illegal hold on the religious body , Shiromani Gurdwara Prabandhak Committee (SGPC) to spread a hate campaign against the BJP. Not a day passes when Giani Harpreet Singh, the acting Jathedar of the Akal Takht, Bibi Jagir Kaur, President of the SGPC and other office bearers do not use religious platforms to spout venom against the BJP. In order to attack the BJP they speak against the Union Government. The fact that a religious body has become a stooge of a political party is by itself appalling; that they are conniving to weaken the Union government and the Indian Nation is dangerous and unacceptable.

It is the right of all citizens of India to follow their political affiliations freely and without fear/intimidation; any attempt to subdue the same goes against democratic tenets and the spirit of the Indian Constitution. The parties that oppose the BJP should fight a political battle within acceptable democratic norms and defeat the party fairly and squarely in the ballot during elections, if they can. By resorting to such shameful and dishonourable tactics they are showing their own insecurity and lack of character.

What is happening in Punjab for the sake of political brinkmanship is absolutely reprehensible. It goes against the very tenets of the traditional brotherhood that Punjab has witnessed since centuries. It is a deep slur on the concept of “Punjabiat.” Further, it has to be remembered that there is a malicious and sworn enemy sitting right across the border watching the proceeding with great interest and ready to exploit all vulnerabilities in the frontier region to its advantage. For its own sake and for the sake of the entire country, Punjab must stop such politically motivated violence should cease immediately.