You are here: Home / Areas of Study / Governance & Politics / Punjab: The acid test of leadership lies in resolution of the Farm agitation
Share 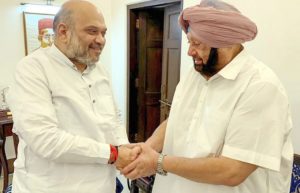 As the time for Punjab state legislative elections approaches, the political landscape in the region is heating up at a very fast pace. The situation and narrative is changing almost overnight. Sadly, incidents of violence are also on the increase, which indicates frustration in certain quarters that wish to see the limelight focussed on themselves and are ready to go to any extent of violence for the same.

The latest and most significant issue that the state is seized with is the decision of launching a new party announced by Captain Amarinder Singh, former chief minister of Punjab. Also of note is the brutal murder of a Dalit Sikh by a group of Nihangs (a Sikh sect).

The decision of Captain Amarinder Singh to form a new party was expected, given the obnoxious manner in which he has been treated by his party, the Indian National Congress (INC). With complete disregard to his decade of service to the party and his stature as two time chief minister he was, in the most arbitrary and obtuse manner, removed from the chair of chief minister a few months before the state assembly elections. No leader of the stature of Amarinder Singh would take such an insult lying down; by deciding to leave the Congress he has done what is right and honourable under the circumstances.

“Hopeful of a seat arrangement with the BJP in 2022 Punjab Assembly polls if farmers’ protest is resolved in farmers’ interest. Also looking at alliance with like-minded parties such as breakaway Akali groups, particularly Dhindsa and Brahmpura factions,” said Amarinder Singh’s media advisor Raveen Thukral in a tweet even as the leader has yet to make a public statement.

The reference to BJP as a possible alliance partner has set the political and media circles abuzz in the state. While the senior leadership of the BJP has maintained a diplomatic silence, the other parties, especially the Congress, are in a state of panic. Wild allegations about Amarinder Singh having been a BJP mole in the Congress since taking over as chief minister are being made by senior Congress leaders. They are in bad taste and only expose the weakness within the party. The SAD has disclaimed the possible alliance between the BJP and Amarinder Singh as an “unholy nexus.” The party has conveniently ignored the fact that it remained a partner with the BJP for thirty long years; what definition can be given to that alliance?  The SAD needs to be reminded of the well proverb “What is good for the gander is good for the goose.”

Quite obviously, the opposition being exhibited to the decision of Captain Amarinder Singh lacks substance and is the result of frustration. For any right thinking person, this move would constitute a step in the right direction and well within his constitutional rights. It will possibly throw up a new leadership which is much needed  in Punjab.

A seat sharing alliance between Amarinder Singh’s party, the BJP and possibly the Taksalis (Dhindsa and Brahmpura) would depend mainly upon two parameters . The first would be the manner in which the new party  evolves. If it is going to be a surrogate of the earlier corrupt Congress dispensation then nothing new can be achieved. Captain Amarinder will need to shed the baggage of the past and come up with a new vision involving new and young talent.

The second parameter would be a rapprochement  with the Farm Bills agitators through joint intervention/engagement by Captain Amarinder Singh and the centre; a positive move in this direction, that comes up with a just and honourable solution acceptable to the centre, the nation and Punjab, would be of great benefit to the region that is suffering immensely due to disruptions caused by the agitation.

In case the aforementioned two parameters are met then all like-minded parties can get together to give Punjab an effective and dynamic leadership. 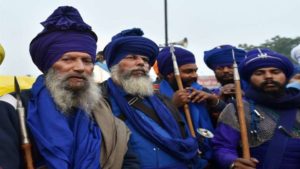 Nihang Sikhs at the Singhu Border

The barbaric killing of the Dalit Sikh, Lakhbir Singh, at the Singhu border has sent shock waves across India and the world. It is seen from media reports that the statements given by those present at the site of the incident, including those arrested on having taken responsibility for the killing, are vague and contradictory. It is being alleged that Lakhbirs’s killing was a premeditated, brutal murder in which an extreme form of violence was witnessed. This makes the agitation sites very dangerous as dens of vice and criminality.

Further, the Supreme court, in a hearing of  a petition seeking removal of the protesters from the roads on 21 October, has observed that farmers had the right to protest, but roads cannot be blocked indefinitely.  “You may have a right to agitate in any manner but roads should not be blocked like this. People have the right to go on roads but it cannot be blocked,” said the bench. “Ultimately some solution has to be found. We are not averse to their right to protest even when a legal challenge is pending, but roads cannot be blocked,” the court further observed. The Supreme Court bench has granted three weeks’ time to farmer unions to file their response and the next hearing has been slated for December 7. As the legalities proceed it is quite apparent that common people are very disturbed by the continuous blockade and the Court is sensitive to their discomfiture.

The vacation of the agitation sites stands identified as the most critical challenge for the regional and the central leadership, since it is posing a huge security threat to the region and to the nation at large. Vacation  on resolution of the vexed Farms Bills issue would be the best and permanent method to put this unfortunate situation to rest.

It is here that Captain Amarinder can play a dynamic role. If he works in close coordination with the centre and succeeds it would be deemed as the biggest service to the beleaguered state. The leadership of the group will then be firmly established.

In the forthcoming elections an alliance based on a righteousness  approach keeping in mind the many challenges that the state of Punjab is facing would be a welcome step in the right direction. Like minded parties will need to reach a common minimum programme and then pursue it with honesty. This would be the best recourse for Punjab.

(Jaibans Singh is a political analyst and columnist)