You are here: Home / Areas of Study / Governance & Politics / Punjab: Will AAP admit that promise of freebies was a mistake?
Share 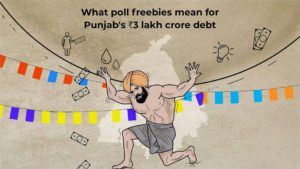 Freebies promised by the Aam Aadmi Party (AAP) during the election campaigning are burgeoning into a major issue now that the party has formed a government in the state and is finding it difficult to stand by its promises and “guarantees.”

The Bhagwant Mann led AAP Government made a lot of promises with regard to providing secure and cheap electricity to the state. The time to keep the promise has come up with the summers setting in and consequent rise in the requirement of electricity. The people now expect the government to stand by its promise.

The AAP Government has responded to the pressure by declaring provision of 300 units of free electricity, but, the terms and conditions are considerably diluted from what was promised. Now the subsidy will not be available if electricity consumption exceeds 300 units.

This change in the promised mandate has caused considerable consternation among the people ; the same, however, stands sidelined by the fact that the state is facing severe power cuts in rural as well as urban areas due to a decrease in supply of power. Public desperation is at a peak since the period of maximum power consumption (which goes to about 15000 MW) is yet to come. The call is for provision of electricity even at full rates.

Shortage in power is quite common in the Punjab during summers, this year, however, the situation has aggravated to critical levels due to lack of domestic production of electricity. It is so because many of the thermal plants are non-functional. The government would like to put the blame on the disruption in supply of coal, but that is a fallacy. Undoubtedly, coal supply has been affected due to unseasonal rains that have disrupted mining, but, enough coal is available to run the thermal plants, only the reserve has decreased. The actual fault lies in delay in the maintenance schedule of the thermal plants leading to their shut down during this peak requirement season.

The second big factor is the adverse financial condition of the Punjab State Power Corporation Ltd (PSPCL). The previous power subsidy bill of the government stood at over INR 10,000 crore; the new promise will increase it by minimum INR 5000 crore. The government has no option but to pay the subsidy in hard cash to PSPCL for which it does not have the resources. Further, there are many government offices that have not cleared their electricity dues to PSPCL, this amount also goes to hundreds of crores of INR. The PSPCL, already under debt to the tune of about INR 20000 crore is in no position to assist the government with the option of a delayed payment.

It is not without reason that the promised subsidy, though announced, has been forwarded to 1 July for implementation. This will give the government time to get its act together and will also cover up for the most critical Kharif season sowing. 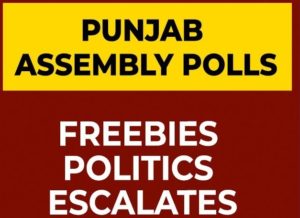 The AAP government has made huge promises of distribution of many other freebies including free water, free school education and free health care – among others. It has now realised that it had overstepped in its promises. Now that it is on the hot seat, it is clutching at straws to identify resources to generate funds and fulfil at least some of the promises made. It has cut down on the pensions of former MLAs and is now attempting to cut the electricity subsidy to farmers.

Billing for electricity such farmers who hold more than 25 acres of land is also a hornets’ nest, considered suicidal for any party and chief minister. It can put the all important farmer community of Jat Sikhs on the war path since they hold maximum number of farms upwards of 25 acres.  It is not without reason that the subsidy to farmers has been carrying on since 1997-98 when the Prakash Singh Badal led SAD-BJP government first instituted the same. Tinkering with it will put the political career of CM Bhagwant Mann in peril.

Punjab has upwards of  14 Lakh electricity connections in the name of agriculture consumers of which the over 25 acres holdings are only about 60,000. The reduction in pensions of the MLAs will generate for the government about INR 80 crore. Overall, the money saved from these two initiatives will not cover the substantial amount that the Government requires for giving a fillip to its freebie schemes. In electricity alone it is required to satisfy 8 million domestic consumers.

The cumulative debt of nearly INR 3 Lakh crore that Punjab is reeling under is no secret; it is to be noted that the freebie promises by AAP were made in full knowledge of this huge liability. On top of it, the Centre’s commitment to compensate for GST revenue shortfalls ends in a few months which will further reduce the revenue of the state by about INR 3000 crore annually.

Under these circumstances, the state can barely meet its revenue expenditure liabilities of salary and pension, what to speak of Capital expenditure outlays. The centre, of course, will be glad to assist in infrastructure and development projects but these will be required to be submitted in proper formats to relevant ministries. Walking up to the prime minister and asking for INR 50000 crore aid is not something that can help ease the situation, it can only  give political brownie points.

The  solution lies in admitting that the promise of freebies was a mistake and it cannot be implemented. The government can compensate by giving good governance that is free of corruption, repression and criminality. It can join with the centre and make a genuine effort to bring in industry and improve employment opportunities, if such a recourse is taken, then the freebies will not be required.

The challenge lies in the massive ego of the top leadership of the AAP which will come in the way of  reaching out to the centre for assistance and joint ventures. AAP needs to acknowledge that the centre is an equal partner in governance of the state and can bail it out of its acute financial deficit.  Can the AAP government take such a mature political outlook?  Only time will tell.