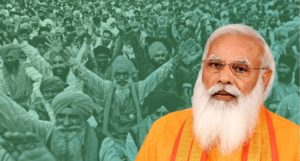 On the auspicious day of Prakash Purab (birth anniversary) of Guru Nanak Dev, Prime Minister Narendra Modi announced the decision of his party and his Government to repeal the three Farm Laws. These laws, also called the Indian agriculture acts of 2020, were formally enacted on 27 September, 2020, after having been passed by both houses of parliament and given an assent by the President of India. The promulgation of the laws witnessed protests in many states, mainly Uttar Pradesh,  Rajasthan, Haryana and Punjab.

Protestors established camps on the border of Delhi, thus causing tremendous economic loss and also considerable inconvenience to commuters to and from Delhi. A series of meetings were held between the Government and the leaders of the Farm Unions which were inconclusive, leading to a prolonged agitation. On 12 January, 2021, the Supreme Court stayed the implementation of the laws and appointed a committee to look into the grievances of the farmers. It was expected that once the matter became sub-judice, the farmers would roll back the protest and go back home but this did not happen, the protest continued.

Now, the government has submitted to the will of a small segment of the farmers who were not convinced about the benefits that would accrue from the laws. In taking this dynamic decision, Prime Minister Narendra Modi has upheld the highest traditions of democracy and exhibited his respect and love for the farmers. The prime minister has also maintained his internationally acclaimed stature of being a statesman who remains sensitive to the feelings of even the smallest segment of society.

While declaring the decision during the course of his address to the nation on the occasion of Gurpurab, the  prime minister was humbleness personified in admitting that “Tapasiya Mein Kuch Kaami Reh Gayi.” What he meant was that though the farm laws would have been beneficial to a major segment of the farmers, but, he and his government failed to convince some segments of the community and hence the decision to repeal the laws altogether.

On the issue of the remainder demands including  a statutory legal guarantee that all farmers will receive minimum support prices for their produce and withdrawal of the Electricity Amendment Bill, the Union Government has given an assurance that a committee of experts and farmer union representatives will be constituted to look into the matter and a decision taken after taking all views into consideration.

Politically speaking, in election bound Punjab and Uttar Pradesh, the decision has taken the wind out of the sails of most parties that oppose the BJP; the party is getting feelers from both the Shiromani Akali Dal (SAD) and from Captain Amarinder Singh for forging an alliance.

The SAD is saying that the falling out of their decades old alliance with the BJP was due to the promulgation of the laws and now when the issue is no longer there, a resurrection of the alliance can be worked out. Captain Amarinder Singh, having left the Congress, is in the process of formulating a new party and needs support of the very big and powerful BJP. Apparently, both entities have realised that they have no political future without support from the BJP and are now desperate to get into an alliance.

The BJP in Punjab,  however, has been working very hard over the last year or so to create a Pan-Punjab signature. It has gained considerable success which will be supplemented by this latest decision of the Government. Under these circumstances, to ally with the SAD would spell disaster. Some sort of a seat sharing  alliance with the new party being floated by Captain Amarinder can be worked out on the basis of like-minded views in charting a progressive future for Punjab.

While there is a wave of euphoria in Punjab at the declaration of the intent of the prime minister, many experts feel that while the farm unions have won the battle the farmers have lost the war. This situation offered an ideal opportunity to the farmers to bring about a change in the repressive agricultural practices of the “Arthiyas” (farm produce traders) and move on to an independent course. There would have been initial hiccups but, with time, the process would have settled down to the benefit of the farmers.

This was also an opportunity to break free from the debilitating Wheat-Rice cycle that is causing unbearable damage to the soil in Punjab and will soon lead to a serious environmental disaster.

It would be best for the rice and wheat growing states like Punjab and Haryana to carry forward the process of reform albeit in a more deliberate manner. There can be a study of incentives to support farmers for switching from rice cultivation and declaration of a policy change rather than a law. In the deliberation stage care will have to be taken to ensure that rigid, obdurate positions are not taken since they can lead to breakdowns of talks.

Benefits have accrued in areas where an open view has been adopted, ‘eChoupal’ Initiative  is helping farmers in procurement/planning etc and eventually to deal directly with the ultimate buyer of their produce. Fishermen are using mobile apps to check prices in various markets up and down the coast and then sailing to and selling into the market offering the highest prices. Such innovations can change the face of agriculture.