You are here: Home / Areas of Study / Governance & Politics / Sacrilege cases in Punjab are nowhere near closure
Share 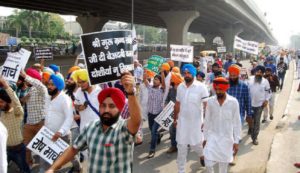 Widespread protests against the sacrilege cases

A series of incidents involving sacrilege of the sacred Sikh scripture, Sri Guru Grant Sahib Ji (SGGS), were reported in 2015. The first incident reported was theft of the SGGS from a Gurdwara in Burj Jawahar Singh Wala, a village in the Kot Kapura Tehsil of district Faridkot, Punjab, on June 1, 2015. A month and a half later, on 23 September, some posters carrying derogatory remarks about the Sikh religion and the SGGS were found pasted in the same village at Dhodha Peer Gate. The third incident was reported on October 12, when Aaangs (pages) of the SGGS were found strewn outside a Gurdwara in Village Bargari, Tehsil Kot Kapura, District Faridkot. In the fourth incident, on November 4, 2015, torn pages of a Pothi (smaller version of the SGGS) were found scattered on the streets of Malke village in Moga district.

Burj Jawahar Singh Wala is about four kms from Bargari and Malke is about eight kms from Bargari. The incidents therefore, took place in the same area though distributed over two districts.

The incidents elicited shock and consternation across Punjab and the rest of the world. The dismayed people took to the streets in protest against the incumbent coalition government led by the Shiromani Akali Dal (SAD); in the attendant violence two people lost their lives.

The inability of the incumbent government to check or effectively investigate the sacrilege cases is believed to be a major reason behind the defeat of the SAD coalition in the hands of the Congress party in the  2017 Vidhan Sabha elections. The then Congress President and later Chief Minister Captain Amarinder Singh swore on the holy book that he would bring the culprits of the sacrilege cases to book, but he could not do so in his four and a half year tenure. The Aam Aadmi Party, in its election campaign for 2022 also promised to punish the culprits of the sacrilege cases “within twenty four hours” of being elected.

While the Bargari, Burj Jawahar Singh Wala and the poster case were subject to investigation by a large number of agencies (including the CBI) and judicial commissions, the case of sacrilege in Village Malke was investigated by a single Special Investigation Team (SIT) under Deputy Inspector General (DIG) Ranbir Singh Khatra who has since retired as Inspector General (IG). Khatra, being a devout Sikh and a committed officer, carried out the investigation with due diligence. He was helped in no small measure by one Sewak Singh, an Army man who was an eyewitness of the sacrilege.

The SIT, in 2018, arrested five followers of Dera Sacha Sauda whose head and self professed God-man Gurmeet Ram Rahim is presently serving a life sentence for various heinous crimes. The Challan was presented in the lower court at Moga on 27 December 2018. Now, after four years, the court of Judicial Magistrate first class, Rahul Garg, has meted out a three year imprisonment and fine of Rs 5000/- to three accused – Pirthi Singh of Baghapurana, Amardeep Singh alias Deepa and Mithu Mann of Malke village, all followers of Dera Sacha Sauda. Two of the accused have been acquitted due to lack of evidence.

The sentence, being the first in the series of sacrilege cases that took place in 2015, has been welcomed by the people of Punjab and Nanak-Leva (followers of Nanak) Sikhs across the world. This has led to a mad rush within political parties to take credit for the same. In the lead is the Aam Aadmi Party (AAP). “The sacrilege case in Malke village was reported in 2015 when the SAD was in power. The Congress formed the government on the promise of delivering justice in the case. However, they did nothing during their rule. It is only the AAP government led by Chief Minister Bhagwant Mann which ensured that the accused get punished,” said Harpal Cheema, Finance Minister of Punjab. 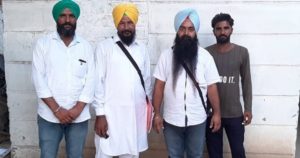 The widespread perception among the people, however, is that credit should go to Ranbir Singh Khatra and other members of the SIT as also to the eye witness, Sewak Singh, who left his job to pursue the case due to his love and respect for his Sikh faith and the SGGS.

The accused have been awarded three years imprisonment under section 295-A and another three years under 120-B of IPC. Both punishments will run parallel. They have been given 30 days to appeal in higher court and have been bailed out as per law. Compare this with the case of BJP national spokesperson Nupur Sharma who is facing charges under Section 153A, 153B, 295A, 298 and 305 of the Indian Penal Code and if proved she will get a jail term in excess of 10 years. Surely the legal c ell of the government could have applied similar sections to ensure enhancement of the punishment . The government led prosecution did not put in enough effort to ensure that the accused got maximum punishment .

Indian army veteran, Sewak Singh, who has pursued the case for seven years is quite vocal in his criticism of the Government, “This is not justice,” he says while adding that, “politicians were claiming credit for the battle that I fought for seven years.” It is hoped that the Government will put in more effort as the case moves to the Higher Courts.

The present Government of Punjab has recently released the report of a five-member SIT constituted on 2 April, 2021, on the directions of the Punjab and Haryana High Court. The SIT is headed by Inspector-General of Police, SPS Parmar. The 497 page report has been made available to a select group of Sikh leaders instead of being tabled on the floor of the Punjab Vidhan Sabha at the just concluded Budget session . This is, however, the first time that a report on the subject has been made public

The report has established a direct link of followers of Dera Sacha Sauda and the self-styled God-man and chief of the Dera, Gurmeet Ram Rahim Singh, with all sacrilege cases. The provocation was a ban on screening of a feature film of the Dera chief. About nine Dera followers have been specifically named in the SIT report while emphasising that they were in touch with the Dera management all through the occurrence of the incidents. Some among the accused are absconding and thus declared as proclaimed offenders others are already in police custody or out on bail. As mentioned above, the chief conspirator Gurmeet Ram Rahim is already in jail; the prime accused, Mohinder Pal alias Bittu was killed by inmates in the Nabha jail.

The SIT gives a clean chit to the Shiromani Akali Dal (SAD) that has suffered great setbacks due to its purported involvement in the sacrilege cases.

The sacrilege incidents remained centre stage in the 2017 and 2022 Vidhan Sabha elections. The people vented out their anger on all such political leaders who, they felt, had not taken the investigation seriously or done enough  to find the perpetrators of  these heinous crimes and bring them to justice.

Though happy with it, the people are unlikely to remain satisfied with the legal outcome of the Malke incident. The incumbent AAP led Government of Punjab has yet not revealed its future course of action post making public the findings of the SIT. All future actions of the Government in this matter will be watched by the people with great interest. The incidents, therefore, are likely to dominate the social and political consciousness of the people of Punjab for a long time to come. There is every possibility of a lot more political heads rolling in pursuit of justice that the people are determined to ensure.