You are here: Home / Areas of Study / Governance & Politics / Sangrur By-election: Punjab continues to look for a leadership change
Share 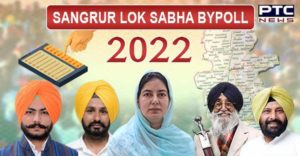 A by-election in the parliamentary constituency of Sangrur, Punjab was held on 23 June 2022. It was necessitated by the vacating of the seat by the previous candidate, Bhagwant Mann, of the Aam Aadmi Party (AAP), who fought the Vidhan Sabha elections from the Dhuri constituency in District Sangrur, won his seat and is now the chief minister of Punjab.

The election, even though valid only till the Lok Sabha elections in 2024, was keenly contested by all political parties. 16 Candidates filed their nomination papers; those from the main political parties were Kewal Singh Dhillon from the Bharatiya Janata Party (BJP), Dalvir Singh Goldy from the  Congress party, Gurmail Singh from AAP, Kamaldeep Kaur from Shiromani Akali Dal (SAD) and Simranjit Singh Mann from SAD (Amritsar).

The SAD identified the release of the “Bandi Singhs” as the main election agenda. These are Sikhs of Punjab who, during the period of militancy in Punjab, were arrested for involvement in militant activities, charged under law, found guilty of various crimes and meted out sentences ranging from death to different terms of imprisonment. A movement for release of the Bandi Singhs has been going on for a long time now. The SAD candidate, Kamaldeep Kaur, is the sister of a Bandi Singh, Balwant Singh Rajoana, who is on death row in Patiala jail for the murder of former Punjab chief minister, Beat Singh in 1995.

The Union Government is processing a case for commutation of the death sentence of Balwant Singh Rajoana to life imprisonment. The Union Government is also processing cases for release of such Bandi Singhs who have served their prison sentences but continue to be in jail. With the government already seized with the matter, making it an election issue definitely has a political connotation.

Simranjit Singh Mann of SAD (Amritsar) also fought the election on the agenda of Bandi Singhs but, along with it, he added the separatist dimension that his party advocates. He openly supports the concept of Khalistan that has been firmly rejected by the people of Punjab.

For the ruling AAP, the election was an acid test of its performance in the last three months that it has been in power, more so, since the constituency has been nurtured by the incumbent chief minister. The party, therefore, held a vigorous campaign including road shows by Mann as well as the national convenor, Arvind Kejriwal.

The Congress was eager to test the political waters in view of the change of leadership that it has brought about in the aftermath of a near exodus of its senior leadership to the BJP. It fielded its strongest candidate from the area. 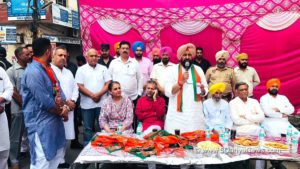 The results declared on 26 June placed Simranjit Singh Mann as the winner having garnered 5822 votes more than his nearest rival, Gurmail Singh of AAP. While the first two candidates scored about 2.5 lakh votes each, the remaining three from the main parties could not cross even the one Lakh mark. The overall voting stood at 45.30 percent as against 72.44 percent in the 2019 parliamentary elections.

Simranjit Singh Mann, 77, is a bureaucrat turned hard line Akali leader who created his own party known as SAD (Amritsar). He first won a parliamentary election from Taran Taran, Punjab in November, 1989 with an overwhelming majority. He was in jail at that time but was released after dropping all charges against him. He, however, was denied entry into the Parliament house for insisting on carrying a Kirpan (sword) of a size bigger than the one allowed for the followers of the Sikh religion. He subsequently resigned his seat in protest. He was elected from Sangrur again in 1999 but lost all subsequent Parliamentary as well as Vidhan Sabha elections.

The resurgence of Simranjit Singh Mann, when seen in concert with the complete decimation of SAD (Badal), raises concerns about a possible increase in radicalised Akali politics that have been rejected conclusively by the people of Punjab for many decades now.

The die was cast almost immediately with Mann invoking  Jarnail Singh Bhindranwale, Deep Sidhu and Sidhu Moosewala in his victory speech. More significantly, Mann had raised the issue of  Khalistan at a SGPC meeting held in May this year. These are dangerous trends that need to be contested politically and socially by the people of Punjab.

Defeat of the AAP candidate in the hands of a failed politician of a fringe group is yet another significant fall out of the election. The people have reacted to the failure of the Government to stand by its promises. The gruesome murder of Sidhu Moosewala, deteriorating law and order situation, unbridled gangster and mafia culture, drug proliferation, terrible situation of electricity and civic amenities are major cause (among many more) for the disenchantment of the people, they are feeling let down and cheated. Most critical is the realisation that the AAP leadership is using Punjab as a financial and political springboard to fructify its national ambitions.

For the BJP, it was the first attempt towards fighting a parliamentary election in the Malwa belt of Punjab, since earlier all candidates here were fielded by the SAD (Badal) as part of the partnership protocol between the two parties. Fighting independently in the Malwa belt for the first time and getting a better voter count then the SAD (Badal) has rid the party of the shadow of its former senior partner in the state. However, a need for introspection emerges from the fact that the vote count of its candidate, Kewal Dhillon, has fallen considerably from the parliamentary election in 2019 which he fought, in the same constituency, as a candidate of the Congress party. BJP has made inroads but a lot of ground, especially in the rural areas of the state, still needs to be covered.

For the SAD and Congress party the clear message is that the people have neither forgotten nor forgiven them for the misrule that they perpetrated, turn by turn, over the last many decades. They will need to bring about drastic  changes in their organisations and their policies to gain some relevance in the state again, if at all.

Overall, it is evident from the election result that the mature and politically aware people of Punjab are looking for a leadership change. They want a new, dynamic, honest and effective leadership that can steer the state out of the massive problems that the state is facing in the social, economic and other fronts. In the Vidhan Sabha elections, they rejected the traditional parties and opted for AAP. Now, within three months, they have rejected AAP for a new face. It seems that the  experimentation will continue till the right combination that can deliver emerges. It is in the interest of the political establishments to read the writing on the wall and opt for induction of new, dynamic, honest leadership that can win the confidence of the people.