You are here: Home / Areas of Study / International Perspectives / The Baloch will go to any extent to secure their freedom from Pakistan
Share 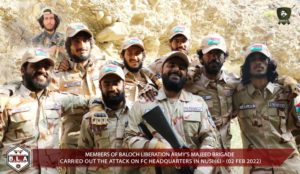 On 2 February  2022, 16 Fidayeen (suicide squad) of the Majeed Brigade of the Baloch Nationalist Army (BNA) executed simultaneous attacks on two military bases of the Frontier Corps of the Pakistan Army in Nushki and Panjgur. These well planned and professionally executed attacks, code named Operation Ganjal, were carried out by nine Fidayeen in Nushki and seven in Panjgur. They commenced with the use of VBIED (Vehicle-Borne Improvised Explosive Device) to gain entry, followed by an assault on the located soldiers with automatic weapons and explosives.

The Pakistani Frontier Corps soldiers were taken completely by surprise. As the rebels gained control  Pakistan was compelled to send in its Special Services Group (SSG) commandos and also use Helicopter Gunships. The overall casualties sustained by Pakistan are estimated to be about 200 soldiers killed including those from the Frontier Corps and SSG personnel. The operation carried on for more than 72 hours.

It is notable here that the Balochistan Nationalist Army was established only recently with the merger of two separate entities – the Balochistan Republican Army and the United Baloch Army. Ever since, it has up-scaled operations that are being conducted with great professionalism and on the pattern of the ISIS. The Tehreek-e-Taliban Pakistan (TTP) and especially the Haqqani network seem to be involved in training and equipping of the BNA.

Pakistan has, of course, denied the casualties, termed the incident as a terrorist attack and said that 13 to 20 “terrorists” have been killed and a few soldiers have attained martyrdom.” In Panjgur, terrorists tried to enter a security forces’ camp from two locations. However, timely response by troops foiled the terrorist attempt. During intense exchange of fire one soldier has been martyred….. the attacks have been successfully repulsed while inflicting heavy casualties to terrorists…… terrorists have fled while their casualties are being ascertained,” said multiple press releases issued by the Pakistan Army publicity wing, the Inter Services Public Relations (ISPR).

Later, Prime Minister Imran Khan paid tribute to the soldiers who were killed in the attack. “We salute our brave security forces who repulsed terrorist attacks against security forces’ camps in Panjgur and Naushki, Balochistan. The nation stands united behind our security forces who continue to give great sacrifices to protect us,” he said.

At least the Pakistan Army gave to the civil administration the liberty to acknowledge the attack and the fact that some casualties took place despite the same causing a big embarrassment for the Pakistan Army Chief, General Qamar Bajwa. 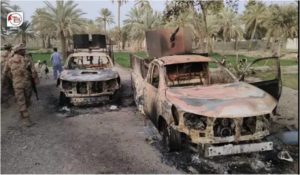 These attacks came within a week of an attack by Baloch rebels on a security post in Kech, Balochistan in which armed fighters killed 10 soldiers. It was also planned to coincide with the visit of Prime Minister Imran Khan to China.

The above is a face saving statement and a denial of the actual situation in the restive province of Balochistan. The fact is that Baloch nationalism is on the increase with more and more youth adopting the path of armed militancy in a quest to seek justice for their beleaguered people. For the Baloch organisations, this has been their biggest and boldest attack against what they look upon as a repressive occupation force. It is their response to the long list of atrocities that have been perpetrated upon them by the Pakistani security forces, including use of death squads, nocturnal pick-ups of innocent people, disappearances, rape and pillage.

The people of Balochistan are convinced that the Pakistani federal regime is determined to keep them in a serf- like status with negligible access to education, health, and other economic opportunities. They are convinced that Pakistan has a single point agenda of colonising the resource rich region and sucking out its huge natural resources for the benefit of a select few sitting in the power centres of Islamabad.

The above is to be achieved in partnership with China through the China Pakistan Economic Corridor (CPEC) that passes through Balochistan up to the Gawadar port. The people of Balochistan are convinced that the vast influx of investment is not likely to benefit locals; they are being marginalised with the local population being kept away from employment opportunities generated by the project.

It is for this reason that the Bloch rebels have also been targeting Chinese workers and these attacks have gained momentum over the last few years. Suicide attacks against the Chinese are being regularly reported since 2018 when, on 12 August 2018, a bus carrying Chinese engineers for the Saindak mining project in Dalbandin area was attacked by Baloch militants leading to injuries to five people including three Chinese engineers; again on 24 November 2018, BLA fighters tried to storm the Chinese Consulate in the high security Clifton area of Karachi. There are many other incidents of such attacks on the Chinese.

It is quite clear that the Baloch will go to any extent to secure their freedom from Pakistan. Earlier, the movement was in the hands of Sardars (local chieftains) sitting mostly in foreign countries, now it seems to have been taken over by young leaders and has thus become increasingly home grown. The new fighters are physically and mentally strong and well trained.

Pakistan wishes to pass off the members of the BNA as a few terrorists who have been brainwashed by  India and Afghanistan. Nothing can be further from the truth, these are inspired players who will not stop short of attaining their goal and are ready to pay any price for the same. Pakistan needs to develop a comprehensive strategy with an inclusive character failing which its survival as a Nation will be jeopardised.

(Jasbir Sarai is a military veteran, strategic analyst and columnist)