You are here: Home / Areas of Study / Social & Cultural Studies / This untold story of Indo-Pakistan War 1971 will fill you with pride
Share 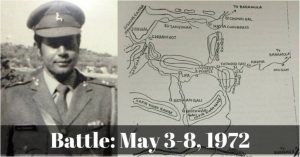 India has actively engaged in four wars with Pakistan – 1947, 1965, 1971 and 1999 Kargil War. Of all the wars fought between the two nations, perhaps the most famous has been that of Indo-Pak war of 1971 that not only led to the creation of Bangladesh, but saw the biggest surrender of an enemy army in near history.

There are innumerable accounts of the war, but what many people do not know is that the war does not end at ceasefire. When you have a restless enemy like Pakistan, who has also lost miserably, the enemy nation tends to violate the ceasefire and aggressively tries to recapture the lost territories.

This is precisely what happened which led to Major Sujeet Kumar Pancholy getting gravely injured.

Major Sujeet Kumar Pancholy joined the most decorated Sikh Regiment of Indian Army in 1968 and was asked to join the invincible 9th Battalion of the Sikh Regiment. He joined the battalion at Amritsar in 1968 and soon during the summer of 1969, they were moved to Tangdhar, an area located around 200 kms N.N.W of Srinagar.

Year 1971 and beyond in the words of Major Pancholy himself

In March 1971, I was ordered to move to operational heights along the LoC at 12,000 feet. This was the time when Mukti Vahini was at peak of its operations in erstwhile East Pakistan and the dark clouds of a war were looming around. In no time, Operation Cactus-Lilly, the code name for 1971 war, began.

It was anticipated that Pakistan will attack India on September 3, 1971 with main armour thrust in Jammu & Kashmir. However, they attacked on December 3, 1971.

During the declared war time of December 3 to December 17, 1971, I along with my brave troops were asked to capture Thanda Pani, Narian heights, Kaiyan and another post which was later renamed as Three Pimples across Tutmari Gali in Lipa valley. Lipa valley had been a favourite route for infiltrators during the 1947 and 1965 war. In December, this area appears like a starving lion awaiting its prey with 20 inches of snow and temperatures reaching as low as -30 degrees.

But, that wasn’t the difficult part. Since the mountains have no tracks, careful and silent movement in soft snow becomes arduous. What was worse was the hanging threat of stepping onto stray mines laid during the earlier wars, avalanches and falling into crevasses.

On December 6, 1971, my troops and I had successfully captured the enemy township of Naukot in PoK and were 13 kms, as the crow flies away from the capital of PoK called Muzaffarabad. Because of the paucity of resources and no communication line, we had no artillery support.

With no artillery support and communication, we adopted the German tactics of infiltration based on the concept of “recce pull” and “surfaces and gaps”.

After the ceasefire in December 1971, the international hostilities ended but the lack of an international border created another hurdle. Since my troops and I had captured an area beyond CFL (Cease Fire Line), there was no let up in war. New LoC demarcation was not in sight as it needs a prolonged agreement which could take up to a year.

Until then, we were ordered to probe and occupy the area as much as possible with Pakistan insisting that wherever Indians are not sitting, as its territory.

So without the benefit of war effort, while rest of the country and the armed forces were rejoicing at the unique historical victory that saw the formation of Bangladesh and surrender of the largest number of troops in Kashmir, my men and I were still at war. Operation Cactus-Lilly was still on.

In May 1972, five months since, we were still at war and trying to hold onto the captured posts while the nation thanked Mrs. Gandhi for the end of the war, Pakistan taking advantage of ceasefire had amassed troops on CFL. This gigantic move by the Pakistan did not garner much attention from the government at the centre. The aim was to dislodge Indian troops and recapture the vital post of Three Pimples and the township of Naukot.

Finally, Pakistan attacked us on May 3, 1972 at wee hours in the morning. With 86 fearless men, I fought till May 4, 1972. But that same day, Pakistan brought in a brigade i.e. roughly 1400 men by helicopters and launched the fiercest attack during the night of May 4.

The Indian Government had still not woken up, and 86 of us had to fight with limited ammunition and depleting resources. As luck would have it, on the 5th morning, Pakistan recaptured the post.

In the last effort to save our motherland, we indulged in hand to hand combat for every inch of the ground.

During a ferocious combat, I managed to kill two enemy men with my hand dagger before being hit by a Pakistani grenade.

Although I had lost much of my men and was critically injured, I later learnt that my men had killed Lt.Col. Haq Nawaz Kayani, the Commanding Officer of 9th Azad Kashmir Battalion.

I was dragged out of the snow by two valiant men of my unit and was slided down on a makeshift stretcher made of wood and turban of the Sikh men.

Out of the 86 who fought, only a handful of us came out of the battlefield alive. To this day, I am nothing but immensely proud of the men I commanded and will eternally remain grateful to them.

The help came in after three days of hiding in the enemy territory. I was shifted to Srinagar on the fourth day after surviving on first aid.

It is another story how I survived. From the battlefield to artillery bombardment, unattended in snow, presumed dead, almost put up on burning pyre, refused further evacuation and making the final journey to the hospital in Srinagar.

I was hospitalised for three years and underwent five major surgeries. On 16th December 1974, I was boarded out of the Army as a proud BATTLE CASUALTY due to the injuries sustained in war. With several internal organs missing, I was honoured with coveted War Wound Medal, War Relief Medal, Sangram Medal, Western Area War Star Medal (Pashcimi Star), Samar Seva Medal and High Altitude Service Medal.

One may wonder as to why have I come up with this story now? Well, the answer lies in the lack of awareness in the media and the government’s sheer denial of any such conflict happening.

However, our story does survive in artefacts and in brief at the army’s museum at Naugam in Kashmir. We can also be found hanging onto the walls at Sikh regimental centre at Ramgarh.

While the Indian government has dutifully turned its back to us, our actions do find mention in the Pakistani army archives.

As I end it today, I wish to say this for my Sikh men, “So valiant in war, so gallant in victory, but they are ever so merciful.”