You are here: Home / Areas of Study / Governance & Politics / Farm protests in Punjab: Holding the state to ransom
Share

Politics over the three agriculture bills have touched the streets. It is no more a quiet protest at the Singhu or the Tikri border. The way protestors have been hounding BJP leaders in Punjab and Haryana is a clear indication of political and subversive elements forcing their covert narrative upon the society.

The farmers’ agitation, which has been going on now for more than eight month has, in fact, come across as an alarming example of how to hold a state to ransom.

While the state government allows the protesters a long rope and lets them disrupt the system with violence it is also setting forth a message of helplessness and covertly condescending in the same breath.

Over 75 toll plazas are blocked causing a loss of lakhs of rupees daily; about 175 corporate offices which have been injudiciously projected as anti-farmer are held under siege. All this is happening when unemployment stares starkly in the face of thousands of the Punjab youths, mostly coming from farmer families. The crisis is increasing by the day with the forced shutdown of more and more business f outlets.

Not too long ago almost 1500 mobile towers, that enable farmers and their family members communicate with their families across the globe, were damaged. Miscreants had a gala time because the police cases never named them, let alone bring them to book under a charge.

In the names of Ambani and Adani, who have nothing to do with the bills, hundreds of shopping centres in Punjab have been forcefully closed by farmers; as a result, employment opportunity of over 40,000 youths has been adversely affected. This, in spite of the fact that the Ambani group has given an undertaking in the High Court that it has no plans, whatsoever, to enter Agro-marketing in Punjab and it never had any such plan.

The life of the state BJP leaders, who again have nothing to do with the passage of three agriculture bills in the Parliament, has been on the edge.  Their clothes are torn in public, their vehicles are recklessly damaged, their movement within the state is often disrupted violently and they are humiliated in the most disrespectful manner. 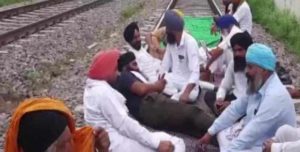 In recent days, farmers protesting against the state Government for increase in the Sugarcane rates and payment of dues have, once again, blocked the railway network and disrupted rail traffic.They  have also blocked highways, causing grave inconvenience to people attempting to join their families for celebration of the festival of Rakhi. Agitated people are saying that if they (farmers) have a problem with the state Government they should Gherao the state Government offices, the residence of the Chief Minister, office of the Congress party etc. Why are they making the life of the common man, who is already suffering so much due to the Farm agitation, even more so miserable

The Punjab Chief Secretary, Ms Vini Mahajan, recently announced that Rs 6900-cr agro-industry is expected in the state soon. With the kind of aggressive and often violent agitation that the farmers have been building in the state, the possibility of such a proposal seeing the light of day is very bleak indeed.

Frequent disruption in Punjab law and order has been a bane for quite some time, add to this the lack of business infrastructure mainly the expensive and unstable electricity situation  and we have a perfect recipe for the mass exodus of business from the state. There is disconcerting news of industry flying out of the state in a big way doing the rounds while the new investors have turned a blind eye to the state.

And now the covert agenda of drawing political mileage out of the protest has also started coming to the fore with posters of Balbir Singh Rajewal, Samyukt Kisan Morcha leader, being projected as a chief ministerial candidate appearing in parts of Punjab. Quick on the heels has been another farm leader Gurnam Singh Chaduni who, along with five other farmer organisations, has announced his decision to contest the forthcoming Assembly elections in Punjab.

As Chief Minister Amarinder Singh also joined the chorus of protesters by making a request to Prime Minister Narendra Modi to withdraw the three bills, it was clear that the agitation is no more in the interest of the state; it is politics to the core.

(The writer is a Chandigarh-based senior journalist)