You are here: Home / Areas of Study / Governance & Politics / Uniform Civil Code: An idea whose time has come
Share 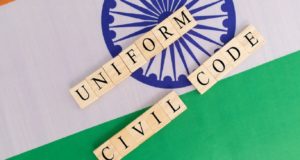 Justice Pratibha M Singh of Delhi High Court on 7 July 2021, advised  the central Government that as caste and religion based barriers are gradually disappearing, a standard uniform code should be implemented for marriages, divorces, succession, inheritance for all citizens of the country. It should be irrespective of religion and caste. A move of this nature, she opined, will provide justice and dignity to women.

Justice Pratibha M Singh quashed the petition and further observed that the youth of India belonging to various castes, tribes, communities and religions should not be forced to struggle with conflicts in various personal laws especially related to marriages and divorces. She also said that as various tribe are following all Hindu customs, rites and traditions they automatically fall under jurisdiction of the Hindu Marriage Act 1955.

The Supreme court had called for enactment of Uniform Civil Code ( UCC)  during the Shah Bano case in 1985 and observed that founders of the Constitution, in Article 44, had hoped that the state shall endeavour to secure for the citizens a UCC throughout the territories of India. The highest court again observed in 2019 that in spite of our observation in 1985, no action has been taken to enact UCC. The bench appreciated the shining example of state of Goa, which has a UCC applicable to all  regardless of religion since Portuguese occupation.

UCC  is an ideal concept based on common set of laws  governing marriage, divorce, succession  and adoption for all Indian citizens instead of allowing different personal laws for people of different faiths. It is also called Saman Nagrik  Samitha. The proposal is to formulate and implement uniform personal laws for the entire nation regardless of castes and religions. The introduction and implementation of UCC was an important part of the Bharitya Janta Party election manifesto in 1998 and again in 2019.

The UCC will strengthen the unity of the nation and especially provide equality and justice to the women. Some segments of the Muslim community, however, feel that it is a violation of Shariat Laws and is as such anti-Islamic

The constitution of India  grants religious freedom and adherence to own customs under Article 25 to 28 but also under Article 44 it directs the Union of India to apply directive principles and common law for all citizens while making national policies for welfare of all.

In India we have many religions and sects – Hinduism, Islam, Christians, Sikh, Buddhist, Parsi ,Jain  and Jews to name a few. Hindus are further subdivided into various castes and tribes. All sects follow their own Gods, holy books, scriptures, customs and traditions. Monogamy has been exercised in Hindu thought process since ancient times although Royals had a choice for more than one wife; child marriages were common, there was the custom of Sati; widow’s remarriage was banned;  daughters had no right of inheritance.

Islam permitted four wives; with time the system of triple Talaq became instant unilateral divorce with no provision for providing maintenance. The Draconian practice had been banned in several Islamic nations before India also passes a legislation to ban the same. Some tribes permit polyandry to keep the property intact.  Consequently, the women do not have equal rights and denied justice.

During the British period, the Lex-Loci Report of 1840 projected an urgent requirement for universal codification of Public laws relating to crimes, property disputes, evidences and contracts; it, however, also recommended that personal laws of Hindus and Muslims need not be included in the same.  Thus, the British followed the policy of non interference in personal laws involving marriages, succession, inheritance and religious ceremonies but public order was controlled through strict laws applicable to all religions.

Due to pressure from Muslim fundamentalist and elites, Shariat Law of 1937 was passed  as a departure from the old policy. It imposed Islamic laws for marriages, divorce, maintenance, adoption on all Muslims.  Some more reformist laws were enacted namely Hindu Widow Remarriage Act 1856, Married Woman Property Act 1923, Hindu inheritance Act 1928, Special Marriage Act 1923 as amended in 1954, Hindu Woman Right to Property Act 1937. A high level committee was formed, which concluded that there was a need for UCC for gender equality and Justice to woman of all religions , it submitted its report in 1947.

After independence, the first Prime minister of India , Jawahar Lal Nehru was in favour of UCC. Dr Bhim Rao Ambedkar, the first law minister also recommended adoption of UCC but he also highlighted flaws in structure of Hindu society and caste system. There were heated debate on UCC. After including reforms, Hindu Marriage Act, Minority and Guardianship Act and Adoption and Maintenance Act was passed in 1956. Women MPs like Raj Kumara Amrit Kaur and Hansa Mehta criticised non implementation of UCC  and considered present personal laws favourable to the patriarchal society.

After enactment of Hindu Code Bill of 1956, the debate on UCC died down. Muslims continued following Islamic personal laws until the Supreme Court granted maintenance to Shah Bano in 1985 as per Section 125 ( Maintenance of Wife , Parents and Children ) of all India criminal code applicable to all citizens of India. Shah Bano was given divorce in 1980 by her husband through Triple Talaq after 40 years of marriage; she filed a suit in a local court  for suitable maintenance, which gave a  verdict in her favour. Her husband, Ahmad Khan, who was a lawyer himself, filed a petition against the verdict stating that he had completed all obligations as per Muslim Personal Law and Nikahnama. Two other woman were also awarded maintenance under the criminal code. The highest court strongly recommended implementation of UCC along with the Judgement in favour of Shah Bano.

The Muslim Woman (Protection of Rights and Divorce) Bill was passed in 1986 by parliament under pressure from fundamentalist and Muslim MPs and Section 125 of Criminal Procedure became  inapplicable to Muslim women. Shah Bano also was forced not to accept the Supreme Court Judgement.

UCC is basically meant to replace the various personal laws applicable to different communities like Hindu Marriage Act, Succession Act, Indian Christian Marriage Act, Divorce Act, Parsi Marriage and Divorce Act and Muslim Personal Law. The proposals include monogamy, gender equality, equal rights for son and daughter over inheritance of fathers property, neutral laws in will and charity, succession, guardianship, divinity and maintenance etc. It will be applicable to all citizens. The main objective  is to remove all evils like child marriage, instant divorce, dowry system, polygamy, polyandry, no  maintenance to wife and children, forced marriage etc and incorporate sound customs of all religions

There will be resistance and opposition from orthodox and fundamentalist groups but a bold decision beyond the vote bank politics is required by the present government  which has sufficient number in both houses.

The bill was introduced in Parliament in November, 2019 by Narayan Lal Pancharia of BJP but was withdrawn for amendment. The bill was put up again by Kirori Lal Meena in March, 2020 but could not be introduced due to pandemic situation.  Despite the delay and roadblocks the day is not far when UCC will become a reality in India